When the mercury reached 134°F here in July 1913, Death Valley officially claimed the title of the world’s hottest place — no place on earth has reached a higher officially recorded temperature, according to the World Meteorological Organization. That’s where you’ll be running at the Death Valley Half Marathon, part of a duo of destination races in July and October organized by Run Planet Ultra.

The Death Valley Half Marathon is the second of two races — the Stay Away 50K being the other, run in July. Like the others, it will take runners on a course through some of the desert Southwest’s most stark, dramatic and extreme landscapes, along the rolling hills, sands and mountains of the Mojave Desert.

All three race distances are set to follow out-and-back routes that start and finish at the Oasis at Furnace Creek resort inside Death Valley National Park, an aptly-named place near the center of the park that serves as the perfect starting-off point to visit sights like Zabriskie Point, the Devil’s Golf Course and Badwater Basin, the lowest point in the northern hemisphere at 282 feet below sea level.

Due to park restrictions, the number of entrants will be limited to 350 runners total across both race distances. The race will feature its own finisher medal and tech t-shirts for all entrants, provided you have signed up at least a month in advance.

Weather conditions of course are highly changeable, and temperatures can swing widely between darkness and daylight here in Death Valley. While the hottest weather here occurs in the summer — when temperatures routinely reach 110°F and often higher, sometimes much higher — October temperatures are typically less extreme.

Still, arrive prepared for extreme conditions, depending on the weather in the days leading up to the race. 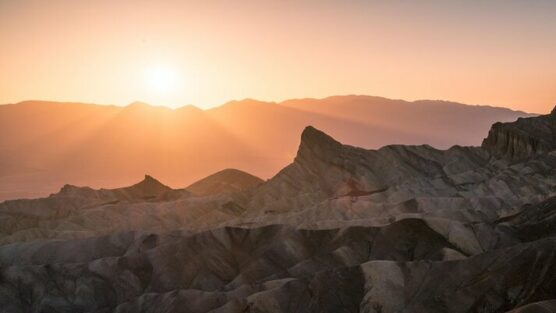 Located along the California-Nevada state line in Southern California, about 290 miles north of Los Angeles and roughly 120 miles west of Las Vegas, Death Valley typically sees October temperatures that average between 62°F and 93°F, while rainfall totals are negligible, averaging about 4/10 of an inch for the month.

See the race route map for the Death Valley Half Marathon here.

To reserve your spot in the 2021 running of RunPlanetUltra’s Death Valley Half Marathon or 10K race, register online here:

Ever run in the Death Valley Half Marathon? Share your impressions here, as well as anything you learned about the race that you think other runners/walkers should know.