Set for its 12th annual running in 2023 alongside other big-name events on the city’s race calendar — including June’s Rock & Roll San Diego Marathon & Half Marathon, the America’s Finest City Half Marathon in August and November’s Silver Strand Half Marathon — the half marathon features an out-and-back course that starts near Petco Park, the home of the Padres.

Just over 6,500 runners crossed the finish line in the half marathon and 5K combined in 2016. Located just blocks from Balboa Park, the ballpark looks out onto both downtown San Diego through the outfield, and the Convention Center, marina and San Diego Bay to the south.

From there, the course will take runners northwest away from the ballpark in the direction of the airport and Harbor Island, where they’ll make a loop around the island looking out onto the water and the U.S. Navy ships parked in the harbor.

After the stretch around Harbor Island, runners will make their way next to Liberty Station, where the Spanish Colonial Revival style buildings of the former Naval training station have been turned into a mixed-use entertainment and shopping district with restaurants, theaters and residential neighborhoods.

Once they make it to the turnaround point in Liberty Station, runners will then head back into downtown and back towards the ballpark, leaving the roads that run along the bay for a stretch that takes them through downtown, and then down 5th Avenue for a finish under the Gaslamp Arch.

The starting time for the race is scheduled to begin at 7:30 AM for runners in the half marathon. Organizers note that the number of entrants for all the races combined is limited to 8,000. There’s also a half marathon relay for two-person teams, so check the official race website for more info. 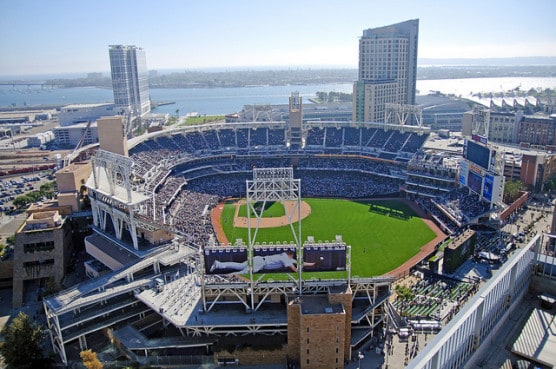 Petco Park, where the half marathon finish line lies. (Photo by SD Dirk/flickr)

Nestled along San Diego Bay in Southern California, roughly 120 miles southeast of Los Angeles, San Diego is known for its year-round mild weather conditions, and March brings average monthly temperatures that range from the mid-60s to the mid-70s, and virtually no rainfall for the month.

San Diego Half Marathon Past Results

Yes, the half marathon is open to both runners and walkers, provided you can finish 13.1 miles within the course time limit of 3 hours, 30 minutes.

To reserve your spot in the 2023 running of the half Marathon, register online at WaveReg.com here.