For runners in San Francisco’s late summer marathon running event, you’ll have a choice you won’t find at most other races — there are actually two half-marathon events to choose from at this race, as runners may run either the first or the second 13.1 miles of the full marathon course. (There’s also an ultramarathon.) This is your introduction to the San Francisco Marathon!

Both races show off different parts of what makes the city what it is, from the Embarcadero and Fisherman’s Wharf in the first half to the scenery of the second half, including gorgeous Golden Gate Park, Haight Ashbury district and AT&T Park, home of the San Francisco Giants.

The course for the first half marathon starts on the waterfront downtown, at Embarcadero and Washington Street, and takes runners on a point-to-point course that follows a mostly westward route along the waterfront through the city, all the way to Golden Gate Park.

Along the way, runners are treated to sights such as the sea lions barking on the shore along Fisherman’s Wharf to local architectural icons like the Transamerica building and the Coit Tower. The course also takes runners past the gorgeous homes and yachts in the Marina, as well as past the wetlands areas of the Presidio.

For the second half marathon, the race picks up near the midpoint of the first half marathon’s course at Crissy Field in the Presidio and takes runners on a southward and eastward route through the city, on the way toward the finish line on the waterfront at Embarcadero and Folsom.

From the start at Crissy Field, the course first unfolds with an up-and-down stretch along the Presidio and the Sea Cliff neighborhoods with the Pacific Ocean in the background. The course then head into Golden Gate Park, taking runners past Strawberry Hill, the Conservatory of Flowers and Stow Lake.

The second half course exits the park on Haight Street and takes runners through a neighborhood that will take you back in time to the 1960s, past Sharon Meadows and through the Alvord Lake Tunnel on your way to the Haight-Ashbury neighborhood.

From there, the course takes runners next toward the Mission District, which has a distinctly Latin vibe, and along the promenade behind AT&T Park, where Major League Baseball’s San Francisco Giants play.

After the baseball park, the course takes a quick run under the Bay Bridge on its way toward the finish line for the second half, along the Embarcadero at Folsom Street.

The race is run entirely on paved city streets, and for what is in many places a very hilly city, the race is thankfully free of any steep, sudden changes in elevation, either uphill or downhill.

There are hills, to be sure — most notably between mile markers 0 and 2, and 3 and 4 — but runners won’t have to climb the intimidating hills that the city is known for. 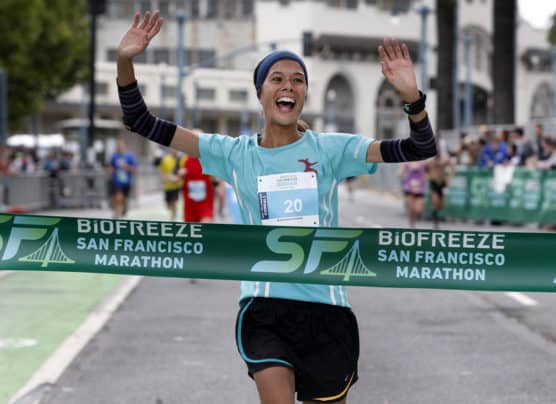 San Francisco’s weather was perhaps best described by Mark Twain, who famously noted that “the coldest winter I ever saw was a summer I spent in San Francisco.” In July, the city’s weather is typically mild to moderately cool, while rainfall amounts during the month are almost nonexistent.

See the race route maps for the Biofreeze San Francisco Half Marathons here.

To reserve your spot in the summer 2023 running of either of the half marathon events at the Biofreeze San Francisco Marathon, Half Marathon & 5K, register online at the event website here.

Ever run in either San Francisco Half Marathon? Share your impressions here, or post your review in the Comments below.