Santa Cruz’s West Cliff Drive, a beautifully scenic and windswept coastal road along this Northern California city’s rocky Pacific coastline, serves as the course for much of the Santa Cruz Half Marathon & 10K, a 13.1-mile road race event that takes runners across a combination of paved city streets and walking and bike paths through the parkland areas of Wilder Ranch State Park.


Anywhere from 3,500 and 4,500 runners and walkers cross the finish line each year in all three races combined, including more than 2,400 runners in the half marathon alone every year.

Hilly with a few steep climbs and descents in spots — especially around mile markers 4, 8 and 9 — the out-and-back race starts and finishes at the corner of Main and Beach Streets. From there, runners follow the course as it heads south toward the coastline along West Cliff Drive, and then north along Swanton Boulevard and Natural Bridges Drive.

Runners then follow the course as it turns west onto Coast Road and then onto the path toward Wilder Ranch State Park, where they run roughly two miles through the park as they make the turnaround and head back toward the finish line in reverse along the course they’ve just run.

Past participants describe the scenery along the course as truly breathtaking, but note that the finish on the sand at Cowell’s Beach can be quite an unwelcome and ploddingly difficult terrain on which to finish for runners who’ve just run 13.1 miles.

As California resident and HalfMarathons.Net reader Brian H. put it in an email report to us in 2007:

“The only part that wasn’t too great was the finish line. You finish, after 13.1 miles and exhaustion setting in, on sand! Your legs are already heavy and you have to trudge through sand to get to the finish line. Then you finish and you look for water and find it, moving off to the right. Then you want some food and you have to look around and it is completely on the opposite side of the water with no easy access.

He also loved the race overall, however:

“This is a wonderfully picturesque run and am very happy that I ran it. An out and back course that follows the coast line and takes you on some trails that you would never find in your car.

“Course difficulty wasn’t too hard, only a few spots with some hills. The first hill is literally right at the beginning of the race, and then another about half way through is a killer in steepness, luckily not too long. There weren’t too many spectators, and the water stations were spread out.” 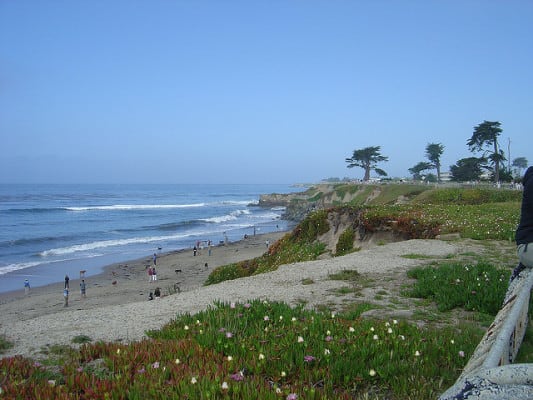 Situated along Northern California’s scenic coastline just south of San Francisco, Santa Cruz enjoys a year-round mild climate, with cool to mild weather in March, a month that has brought record temperatures here as low as 28 degrees (in 1971) and as high as 88 degrees (in 1988).

See the race route map for the Santa Cruz Half Marathon here.

To reserve your spot in the 2021 running of the Santa Cruz Half Marathon, 10K or 5K race, register online at Active.com here.

Ever run in the Santa Cruz Half Marathon? Share your impressions here, or post your review in the Comments below.