Set for its annual running along the trails and hills of Santa Teresa County Park near San Jose, the King Richard Annual Half Marathon, 10K and 5K race takes runners on an out-and-back double-loop route that winds through this 1,627-acre park filled with plenty of challenging uphills and downhills.

The race is organized by Troy’s California Trail Runs, a Northern California-based race management company that stages trail races throughout the spring and summer around the San Jose and San Francisco areas, with a wide range of race distances — all the way from 5K and 10K runs all the way to 32- and 50-mile trail runs, in the parks and mountains that lie just to the south of San Jose.

For the Santa Teresa County Park races, runners will follow an out-and-back course that starts and finishes at the park’s Pueblo Day Use Area. From there — all three races share an 8:45 AM starting time — runners will head west along the park trails, with names like the Mine Trail, Fortini Trail, Stile Ranch Trail and the Bernal Hill Trail, making what could be described roughly as a figure-eight-shaped pair of loops around the park.

The steepest hills occur in the early going, on the switchback trails that lead runners up several twists and turns along the Stile Ranch Trail between the first and second mile markers.

There’s a steep downhill drop around the mile 4 marker, and then runners will hit another steep uphill stretch between the mile 5 and 6 markers, as they’re heading west along the Mine Trail toward the Bernal Road crossing.

Once they make it back toward the Pueblo Day Use Area, runners will then make a second loop around the trails to complete their 13.1 miles for the half marathon, while those running the 10K will have finished their race.

All around the park, from the hills and the trails runners will be able to take in the serene beauty of the Santa Clara and Almaden Valleys below, here from the southern end of the Santa Teresa hills.

The terrain for the half marathon route is made up of roughly half dirt roads and half single-track trails, organizers note, and runners will need to bring cash with them on the day of the race for the park entrance fee. 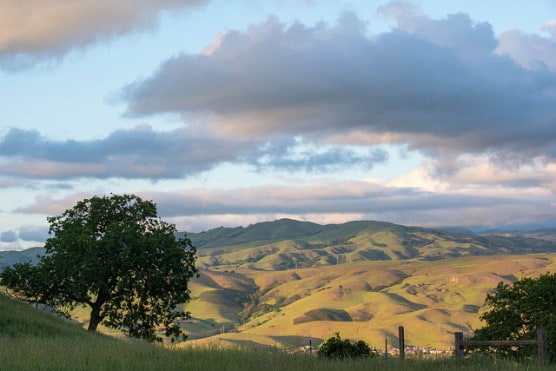 Located near the San Francisco Bay Area, about 10 miles southeast of downtown San Jose, Santa Teresa County Park typically sees mild and sometimes warm weather in April, a month that has brought record temperatures as low as 37 degrees (in 1952) and as high as 101 degrees (in 2001).

Ever run in the Santa Teresa County Park Half Marathon? Share your impressions here, or post your review in the Comments below.