The streets of Sacramento welcome more than 7,000 runners and walkers every March at the Shamrock’n Half Marathon, organized by Fleet Feet Sports-Sacramento and one of a series of more than a dozen running events in the local Buzz Oates Run Sac Race Series, which takes place from February through November.

Fast and flat and run along what is roughly a counter-clockwise, out-and-back loop course through the streets of Sacramento and through Miller Park and Land Park along the river, the Shamrock’n road race is the city’s largest half marathon, and also features a 5K and 10K run on Saturday.

Open to both runners and walkers, the race uses a wave start that begins at the city’s Raley Field, home of the Sacramento River Cats, the AAA affiliate of Major League Baseball’s Oakland Athletics.

From there, the course follows a winding path with a number of twists and turns, crossing the Tower Bridge over the Sacramento River from West Sacramento into the city of Sacramento for the race’s first couple of miles.

The route on the Sacramento side takes runners along Front Street and 2nd Street before turning down for a stretch along the bike trail toward Miller Park, and then back up along bike trail along the river.

After the stretch along the riverside trail, it’s time to weave through the streets of Sacramento, following the course through Land Park and back into downtown Sacramento. Then it’s back over the Tower Bridge into West Sacramento, for a stretch of the course that gives runners plenty of views of the city’s skyline across the river.

In the last few miles of the race, runners make their way through West Sacramento all the way back toward the finish line at Raley Field, where finishers can see themselves and hear their name called as they watch themselves on the big Diamond Vision screen inside the baseball park.

The course time limit is 4 hours from the final wave start time, which means runners will need to keep a pace of 18 minutes per mile or faster. 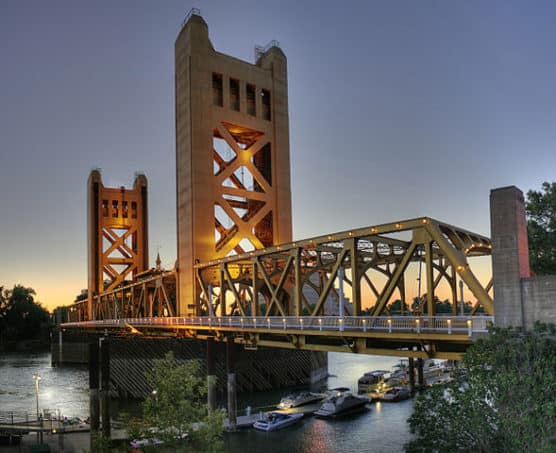 The Tower Bridge across the Sacramento River, which you’ll run across during the race. (Photo by Wikimedia Commons)

See the race route map for the Shamrock’n Half Marathon here.

Yes, the half marathon is open to walkers as well as runners.

$60 and up for the half marathon

To reserve your spot in the 2023 running of Sacramento’s Shamrock’n Half Marathon, register online at RaceRoster.com here.

Ever run in the Shamrock’n Half Marathon? Share your impressions here, or post your review in the Comments below.