Formerly known as the Pacific Shoreline Marathon & Half Marathon, the Surf City USA Marathon & Half Marathon takes runners along a flat, fast course that certainly delivers on its name, as it is run mostly along the beaches of Southern California’s Pacific Coast Highway, through the towns of Huntington Beach, Sunset Beach and the Bolsa Chica State Beach.


Considered one of the best half-marathon road race events in the country, this USA Track & Field-certified event saw more than 18,000 runners and wheelchair competitors cross the finish line at its 2016 running, which also includes live music as well as the sounds of the waves crashing along the shore throughout the course.

From the starting line along the Pacific Coast Highway near the intersection with Huntington Street, this flat race — runners will experience an elevation change of no more than 100 feet over the course of the race — follows a mostly long, straight out-and-back course along the PCH, with the brief exception of a detour along Seapoint Avenue, through Huntington Beach’s Harriet Weider Regional Park.

Along the way, the race takes runners past the famous Huntington Beach pier, allowing them to enjoy the beauty of the Bolsa Chica Wetlands as they start the turn.

There’s much more than beaches and ocean to see along the course, past participants note. As runners follow the course that skirts the Bolsa Chica Ecological Reserve, a 300-acre nature and wildlife preserve that lies between mile markers 5 and 7 on the course, they’ll be treated to sights such as many migratory birds, including great blue herons, brown pelicans and snowy egrets.

Thanks largely to the size of the fields the race attracts, a wave start is used to send runners off, with waves leaving the starting line every two to three minutes. The first wave of runners will start at about 7:45 AM, and organizers say it make take as long as half an hour to send off all the waves of runners for the half marathon.

Runners should also keep in mind that they’ll have about 5 1/2 hours to finish the race in order for their results to be counted officially and to receive a race finishing medal — you must finish no later than 1:30 PM, organizers note. 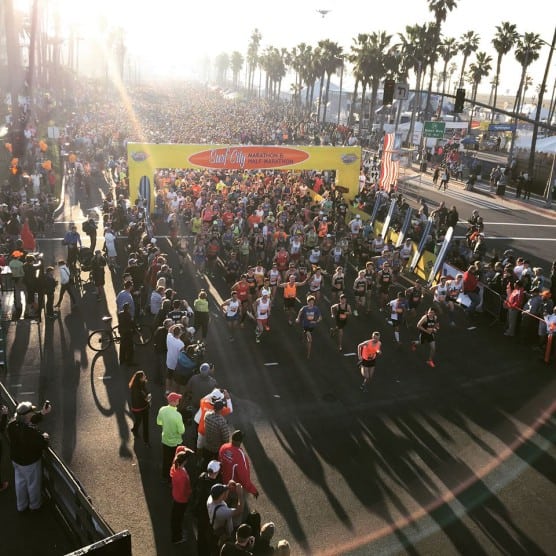 The starting line at the Surf City USA Half Marathon. (Photo courtesy RaceForce)

Nestled along the southern stretch of California’s Pacific Coast Highway, just a few miles south of nearby Long Beach, the town of Huntington Beach generally enjoys weather conditions much like those of the rest of Southern California — mild to moderately warm throughout the year, with lots of sunshine and little variation in temperature from January to December.

In February, temperatures average between 62°F and 77°F, while rainfall amounts average about 0.3 inches for the month. On the day of the race (February 5), the average low is 64°F and the average high is 78°F.

To reserve your spot in the 2023 running of Huntington Beach’s Surf City USA Marathon or Half Marathon race, register online at Active.com here.

Ever run in the Surf City USA Half Marathon? Share your impressions here, or post your review in the Comments box below.