Set for its annual running along the shoreline of Santa Cruz County, the Surfer’s Path Marathon & Capitola Half Marathon feature some of the most scenic race courses anywhere in the Golden State, with truly breathtaking views of the Monterey Bay coastline and a series of world renowned surf breaks.

Both the half and the full marathon start on the legendary Santa Cruz boardwalk, and from there run along the cliff roads that wind along the coast of Santa Cruz County, largely along East Cliff and Opal Cliff Drives.

For runners in the Surfer’s Path Marathon, that means 26.2 miles that take them east along the bluffs to the nearby city of Capitola, where they’ll make a loop through Capitola Village and will retrace their steps back along the coastline before turning back again onto the boardwalk and next onto the West Cliff path.

From there, the course travels to historic Wilder Ranch State Park where runners complete a picturesque bluff trail loop before their return to West Cliff and the finish near the Santa Cruz Municipal Wharf on Cowell’s Beach, where the post-race festivities and awards ceremonies will be getting started.

For runners taking part in the Capitola Half Marathon, the 13.1-mile course unfolds (like the full marathon) from Santa Cruz to Capitola and back, starting at the Santa Cruz Beach boardwalk. The route takes runners east along the coast past the Santa Cruz Harbor, Moran Lake and Pleasure Point as it makes its way to the city of Capitola.

Following a loop through Capitola Village, runners will retrace their steps back along the coastline, continue past the Boardwalk, and make a left turn after the Santa Cruz Municipal Wharf to the finish on Cowell’s Beach.

Both the half marathon and the full marathon share the same starting line and time — 7:00 AM at the Santa Cruz boardwalk — and runners will have 6 hours to complete the course. Runners will need to keep a pace of 13 minutes, 45 seconds per mile or better in order to finish within the official race time limit.

Nestled along the central California coastline, about 70 miles south of San Francisco and roughly 340 miles northwest of Los Angeles, Santa Cruz typically sees mild to moderately warm (and usually very dry) weather in May, a month that has brought record temperatures here as low as 33 degrees (in 1950) and as high as 98 degrees (in 1973). 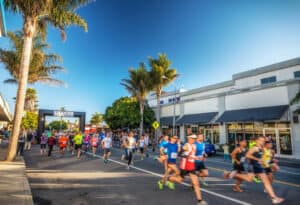 See the race route map for the Capitola Half Marathon here.

To reserve your spot in the 2023 running of Santa Cruz’s Surfer’s Path Marathon or Capitola Half Marathon, register online at RaceRoster.com here.

Ever run in the Half Marathon? Share your impressions here, or post your review in the Comments below.