The largest city in Northern California’s wine growing region opens up the pathways along its Santa Rosa Creek and Prince Memorial Greenway park areas for the Santa Rosa Marathon, Half Marathon & 5K, which marks its 15th annual running in the late summer of 2023.

Open to both runners and walkers, the race features plenty of sights that make for a memorable run, from the trestle bridges runners cross over the creek to the vineyards and farm fields filled with rows of corn along the race route.

Most of the race takes runners just west of the city’s downtown along the paved, natural surface and gravel pathways that parallel the meandering Santa Rosa Creek, much of which has undergone restoration efforts in recent years to reintroduce more natural environments and habitat for the native species of fish and birds that once thrived there, but had long since migrated elsewhere as the creekbed was paved over and became a haven for homeless encampments and vandals.

Start and finish in Juilliard Park. Starting in the 1980s, groups of concerned citizens in Santa Rosa began turning their attention and their fundraising efforts toward the creek, and since then many areas have opened up once again with trees and parkland, as well as paved pathways for running, walking, hiking and biking along the creek, which extends out west from Santa Rosa’s downtown district, and even passes by its City Hall building, which lies just a couple of blocks north of the race starting line, in Juilliard Park.

Known for its gorgeous green grassy lawns and its plentiful oak and redwood trees, the park bears the namesake of “that” Juilliard — yes, the family whose son August founded the famous Juilliard School of Music in New York City.

The land for the park was donated by Frederic Juilliard (August’s nephew) in 1931, after he moved from California to New York, and today the park is famous also for its contribution to the arts in the local area, as it hosts the city’s annual Live at Juilliard summer concert series.

Onto the Santa Rosa Creek Trail. From the park, those running in the 13.1-mile half marathon follow the route first north a few blocks and then onto the pathway that leads along the Prince Memorial Greenway that runs alongside the creek. Runners (and walkers) follow the course all the way westward out to the turnaround point along Willowside Road, at about the mile 7 marker.

On the way out for the first half, runners remain on the portion of the trail that run’s along the creek’s northern bank; the second half of the race brings runners back eastward largely along its southern bank. Runners re-join the northern side of the creek at Stony Point Road, just before hitting the 11th mile marker. 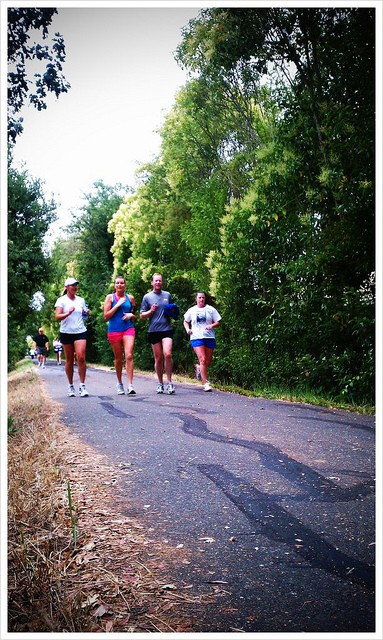 With only gentle (and mostly imperceptible) rises and falls in elevation here and there, the course is virtually flat the entire way, and features a mixture of terrains, from gravel and dirt paths to paved paths.

Nestled among the Northern California wine country and just north of the Bay Area, roughly 55 miles north of San Francisco, Santa Rosa typically sees its warmest and driest weather conditions of the year during the late summer.

See the race route map for the Santa Rosa Half Marathon here.

To reserve your spot in the 2023 running of the Santa Rosa Marathon or Half Marathon, register online at Enmotive.com here.

Ever run in the Santa Rosa Half Marathon? Share your impressions here, or post your review in the Comments below.