The Town’s Half Marathon & 5K

Part of this city’s annual RunOak festival, The Town’s Half Marathon is the marquee running event of the weekend, and features a loop course that takes runners around the city, including stretches through Chinatown and past Jack London Square — with a slow, gentle climb until just past the halfway point and then a (mostly) downhill finish.


You’ll also run through Lakeside Park and nearly all the way around Lake Merritt before crossing the finish line and enjoying the post-race festival that’s open to the public.

As runners begin their descent and the second half of the race, the course heads south down Grand Avenue and through the neighborhood of Grand Lake.

At mile marker 9, runners will pass through Adams Point and run the top perimeter of Lakeside Park. This section of the course takes runners through Lakeside Park and offers plenty of scenic views of Lake Merritt.

Just past mile marker 11, runners will continue along the course out of the park, but staying along the perimeter of Lake Merritt until just beyond mile marker 12. Once racers get to 14th Street, it is time for the final kick as the course heads to the finish line on Clay Street.

There is a 3-hour course limit for the half marathon, which means you’ll need to keep a pace of 14 minutes per mile or faster. Runners who complete the race will a finisher’s medal, tech T-shirt, a commemorative mason tasting jar, and almond butter sandwiches and berries from Whole Foods Market.

There’ll be live music plus food, beer and wine waiting for you at the post-race festival, which starts at 8:00 AM and features a concert on the steps of Oakland City Hall. 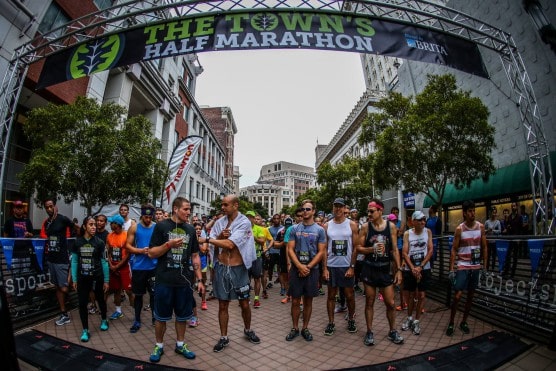 The starting line at The Town’s Half Marathon. (Photo courtesy RaceForce)

Like much of the Bay Area, Oakland is known for its temperate, seasonal Mediterranean climate, with dry, warm summers that are usually a little warmer than in nearby San Francisco. In August, highs average in the lows 70s while average lows are in the 50s, and rainfall is rare here this time of year.

See the race route map for the The Town’s Half Marathon here.

To reserve your spot in the 2017 running of Oakland’s The Town’s Half Marathon or 5K race, register online at imATHLETE.com here.

Ever run in the The Town’s Half Marathon? Share your impressions here, or post your review in the Comments below.