Set for its annual late spring running along the trails that wind through the Waddle Ranch Preserve here in Northern California’s Humboldt-Toiyabe National Forest, just north of Lake Tahoe, the Truckee Running Festival hosts three races and a race for kids – with the Waddle Ranch Trail Half Marathon, 10K and 5K.

You’ll get to run through some of the most stunning scenery the Lake Tahoe area has to offer, as you’ll pass by mountains, forests and lakes, and make your way along single-track trails for much of the race, especially the sections after you enter the Waddle Ranch Preserve.

Nestled in the heart of the Martis Valley near Truckee, the 1,462-acre preserve was created only recently (in 2007) in response to nearby residential development, which had threatened to displace many of the native wildlife that live in the forest.

When you run through the single-track trails that wind through the preserve, know that you’ll be running through a piece of native American history, as the area’s original inhabitants were the Martis people, who left behind artifacts here estimated to be between 2,000 and 3,000 years old.

The race will feature an out-and-back course that starts and finishes at Riverview Park, which lies just south of the banks of the Truckee River and just north of Truckee-Tahoe Airport.

From there, the race heads east along both roads and trails for the first couple of miles, and then heads across Martis Dam at the top end of Martis Creek Lake. Once you make it around the end of the lake, you’ll begin the stretch that enters Waddle Ranch Preserve, and that’s where the really challenging stretch of the half marathon starts.

The race has an overall elevation gain of 1,450 feet, and you’ll feel it starting around mile 3, as the race climbs nearly 500 feet between the third and fourth mile markers. That’s followed by an almost equally steep downhill over the next couple of miles, and then once you’ve made the turnaround, there’s another big climb between miles 8 and 9.

That’s when you’re making your last mile out of the preserve and then back onto the roads that lead back to Riverview Park, where you’ll cross the finish line.

Organizers note there will be 6 aid stations out on the course, but you’re encouraged to bring your own water with you. 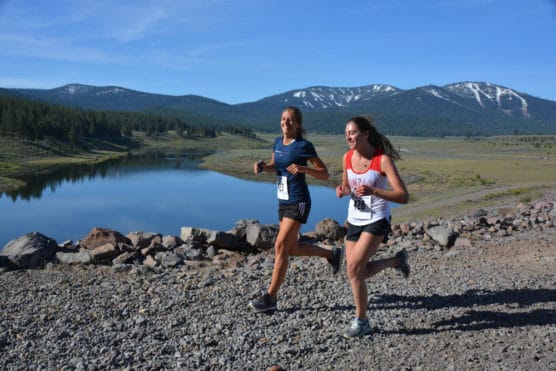 Located just north of Lake Tahoe in Northern California, about 100 miles northeast of Sacramento and just over a half-hour’s drive from Reno, Nev., Truckee typically sees warm (but still often quite cold) weather in June, which is also one of the area’s driest months of the year.

See the race route map for the Waddle Ranch Trail Half Marathon here.

To reserve your spot in the 2022 running of the Truckee Running Festival Waddle Ranch Trail Half Marathon, 10K or 5K race, register online at UltraSignUp.com here.

Ever run in the Waddle Ranch Trail Half Marathon? Share your impressions here, as well as anything you learned about the race that you think other runners/walkers should know.