Part of a brand-new series of races taking place this year in the U.S. and the U.K., with more planned around the world in 2018, the Virgin Sport Festival comes to San Francisco this fall with a half marathon, a Twin Peaks Mile race — a hill climb up the city’s stunning Twin Peaks Boulevard — and more for those who aren’t up for the “hardcore” running events.


What the Virgin Sport Festival is all about. It’s the brainchild of Richard Branson, the billionaire British investor and businessman, whose idea was to create a series of athletic events that cater to more than just hardcore athletes who can run 13.1 or 26.2 miles.

Instead, his idea is to combine running with yoga, fitness classes and easier runs, as well as performances by local musicians and artists. He signed Mary Wittenberg, the former chief executive of the New York Road Runners, to head Virgin Sport a couple of years back, and the group’s first races debut this year.

Where the race starts/finishes. This half marathon follows a loop course around the city, starting just a block from City Hall on Larkin Street, next to Civic Center Plaza. You’ll finish back where you started, right on Larkin.

In between the two, you’ll run through Haight-Ashbury, Golden Gate Park, and a long stretch through the Presidio, which features some of the race’s most stunning scenery as well as some of its most challenging hills. You’ll run past Crissy Field and along Marina Boulevard here, and in the final miles through Russian Hill, Nob Hill and Little Saigon.

How hilly is it? This race, like all San Francisco distance races, features some challenging hills from the get-go — the first mile features a climb of roughly 200 feet, and there are steep hills later in the race too, especially between miles 5 and 6, and again between miles 7 and 8.

The final three miles feature an uphill that climbs more than 170 feet, but that’s followed by a downhill run through most of the final mile of the race. 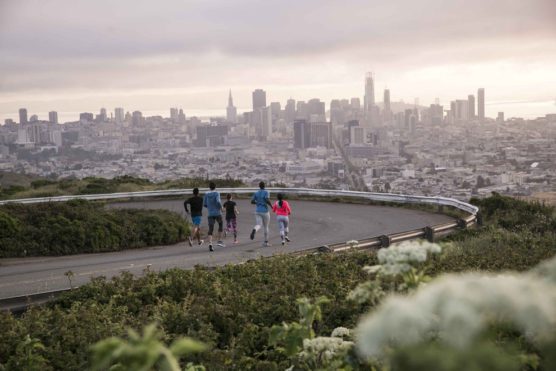 Here’s what the race directors have to say:

“Run Virgin Sport’s first half marathon in the U.S. this October in stunning San Francisco! Experience Richard Branson’s latest red-hot venture and this first-ever challenge with the new SF Half marathon, Twin Peaks Mile and Go Fit Yourself line up.

“The festival includes thousands of runners from all over the world and features the best local foods, art and culture all weekend. Sign up now — like you, the spots will go quickly.”

October usually brings mild, dry weather to the San Francisco Bay Area, though foggy and chilly conditions are common in the mornings and evenings. There’s usually plentiful sunshine during the day, and the city averages a little over 1 inch of rainfall for the month.

To reserve your spot in the 2017 running of the Virgin Sport SF Bay Half Marathon, Twin Peaks Mile or Combo, register online at the event website here.

Ever run in the Virgin SF Bay Half Marathon? Share your impressions here, as well as anything you learned about the race that you think other runners/walkers should know.