There are few places in America that are as perfect a place to run as San Diego. Nearly year-round perfect weather, beautiful views of the San Diego Bay, and plentiful scenery both in the city and along its often rocky shorelines makes this a popular spot for running events of all kinds, from the Rock ‘n’ Roll Marathon that’s been a fixture here going on two decades to a slew of half marathons that are run here every year.


The Women’s Running San Diego Half Marathon makes its third annual running here in April 2015, along an out-and-back course that starts and finishes on Cushing Road, alongside the U.S. Naval Training Center that overlooks the northern end of the bay. From there, the race unfolds along Cushing and Laning Road, and then onto Harbor Drive, for a long stretch that runs past the San Diego International Airport and over onto Harbor Island.

Once they’re on the island, runners will make their way first to the eastern end of the island and then turn around and run all the way to the western end, before heading back across the isthmus of land that connects Harbor Island with the mainland. A short stretch through Spanish Landing Park and then runners are back on North Harbor Drive, heading west.

Though there are a few rolling hills here and there, most of the course is pancake flat — it’s run largely at about 12 feet above sea level, and the course never climbs above 22 feet throughout the race.

Continuing along North Harbor Drive, runners head around America’s Cup Harbor to Shelter Island, where they’ll run the length of the island along the edge of Shoreline Park. Originally a sandbank, the “island” — it’s not really an island, as it’s connected to the mainland by a narrow strip of land — was filled in with dredged material in the 1930s and by the 1950s, it had become built up with hotels, marinas and restaurants.

After runners reach the end of Shelter Island and make the loop turnaround, they retrace their steps back over to the mainland, and then again along North Harbor Drive to the Halsey Road bridge. Once over the bridge, they’ll head around the edge of the Naval Training Center and cross the finish line on Cushing Road.

The course is USATF-certified, and runners must be able to complete the course within the 4-hour time limit, which means they’ll need to keep a pace of 18 minutes per mile or faster — and walkers are welcome. 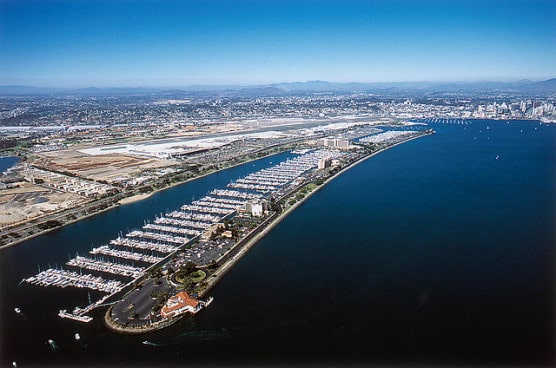 Located in Southern California, just miles from the U.S.-Mexico border and roughly 120 miles southeast of Los Angeles, San Diego typically sees April temperatures between 56ºF and 69ºF, while rainfall is scarce, averaging about 3/4 of an inch for the month.

To reserve your spot in the spring 2015 running of the Women’s Running San Diego Half Marathon or 5K race, register online at the event website here.

Ever run in the Women’s Running San Diego Half Marathon? Share your impressions here, or post your review in the Comments box below.