Hilly and challenging with more than 1,800 feet of climbs and descents over the course of the race, the Woodside King’s Mountain Half Marathon & 5-Mile Run offers the chance to run one of Northern California’s first trail half marathons of the year in Huddart County Park, nestled in the Santa Cruz Mountains just south of San Francisco.


Shaded by towering redwood and oak trees and bordered by abundant wildflowers along the way, the out-and-back route takes runners on a winding trail from the 973-acre park’s picnic area to the turnaround on King’s Mountain Road and back.

From the race starting line, the course follows a mostly uphill route all the way to the halfway point at the 6.5-mile marker, with the exception of a nice, flat stretch between the third mile marker and midway between the 4th and 5th miles.

After that brief respite, it’s back along the uphill toward the midway point, after which it’s mostly downhill as runners run back toward the park picnic area along the route they’ve just run.

While there is an aid & water station at the half-way turnaround point for runners in the half-marathon, those running the 5-mile race will have their only aid station at the start/finish area, so 5-mile runners are encouraged to carry water bottles with them during the race. Half marathoners are also encouraged to carry water if they anticipate needing it before the halfway point.

The area through which the race is run borders some of Northern California’s wealthiest and most exclusive neighborhoods and residential areas, and is home to such business and entertainment luminaries as Oracle CEO Larry Ellison, actress Michelle Pfeiffer and rock and roll musician Neil Young.

The area is known for its forests of redwood and oak trees, and its mountainous terrain is no accident — the infamous San Andreas Fault runs through the town, which has been a major cause of this area’s earthquake activity over the past century. 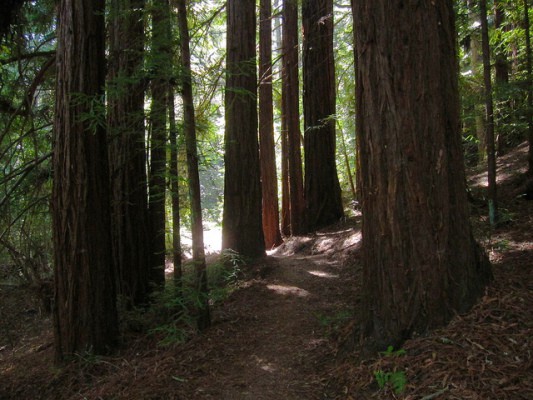 Located in the Bay Area about 31 miles from nearby San Francisco, the town of Woodside lies just up the slopes of the Santa Cruz Mountains from Redwood City, which tends to experience warm and dry weather (with some cool mornings) in the late spring.

See the race route map for the Woodside King’s Mountain Half Marathon here.

To reserve your spot in the 2018 running of the Woodside King’s Mountain Half Marathon or 5-Mile race, register online at the event website here.

Ever run in the Woodside King’s Mountain Half Marathon? Share your impressions here, or post your review in the Comments box below.