Just shy of 150 runners crossed the finish line at last year’s DreamCatcher Half Marathon, which unfolds largely along the walking, biking and running trails that parallel the Colorado River here in Grand Junction, a city of more than 140,000 among the mountains and mesas of western Colorado.


Unlike its larger brethren like the Rock ‘n’ Roll Denver Marathon & Half Marathon, which boasts more than 10,000 finishers every year, the DreamCatcher Half is definitely one of the state’s smaller races. Its average finishing time in 2016 was 2:33:48, an indication that it’s designed as a race for every level of runner, from beginners to experienced half marathoners.

What’s the course like? Most of the race unfolds along Grand Junction’s Riverfront trails, which lie along the banks of the Colorado River. The race follows an out-and-back route that starts and finishes at the Western Colorado Botanical Gardens and Butterfly House on Struthers Avenue, and from there takes runners onto the trails, which are about 60 percent paved.

The stretches that aren’t paved are made up of both gravel trails and dirt roads, so some stretches could be pretty muddy on race day depending on the weather.

What’s the race like? There’s a 5-hour course time limit, but organizers say they’ll keep the finish line open for all runners who reach the mile 9 marker by 12:00 noon. They also give out four awards — to the first place male and female finishers, and to the last place male and female (the “Had to Work the Hardest for the Goal” awards).

What’s the start/finish like? Organizers plan to stagger the starting time for runners beginning at 7:00 AM for the slowest runners. That’s the “Rocker” start.

What is there to see and do in Grand Junction after the race? Plenty. The city is surrounded by the rugged natural beauty of the Colorado Western Slope, and you can pay a visit to one of several wineries here in the Grand Valley after the race, or visit the Colorado National Monument, a 20,500-acre wilderness area filled with canyons, deserts and spectacular rock formations like the one pictured below. 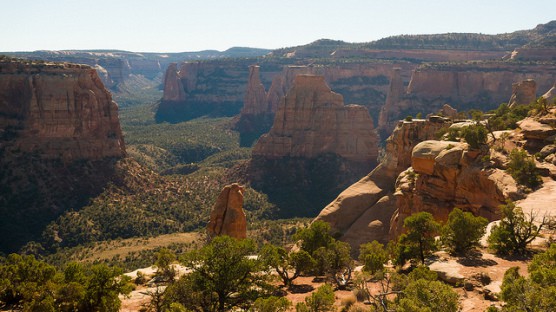 Nestled along the confluence of the Gunnison and Colorado Rivers in western Colorado, just miles from the state’s border with Utah, Grand Junction typically sees March temperatures between 31ºF and 56ºF, while rainfall amounts average 1 inch and snowfall averages just under 3 inches for the month.

See the race route map for the DreamCatcher Half Marathon here.

To reserve your spot in the late winter/early spring 2019 running of Grand Junction’s DreamCatcher Half Marathon, register online at RunSignUp.com here.

Ever run in the DreamCatcher Half? Share your impressions here, or post your review in the Comments below.