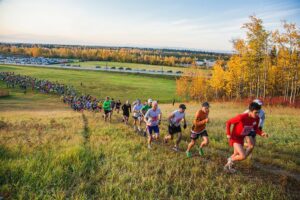 Known both for its whitewater rapids and for the plentiful trout that make it a mecca for fishermen around the region, Colorado’s Cache la Poudre River and the Poudre River Canyon serve as the setting for the annual 13.1-mile and five-mile race that will take place at the time of the autumnal equinox fitting for the Equinox Marathon and Half Marathon.

The race follows a point-to-point course through the canyon, starting at the famed restaurant and music venue known as the Mishawaka Amphitheatre, where acts ranging from country singer Hayes Carll to bluesman Keb Mo perform in the evenings throughout the summer.

The race finishes about a half-mile before reaching Ted’s Place in nearby Larimer, where runners will get to take in the spectacular views of the mountains and the nearby Roosevelt National Forest, which they’ll have just run through.

In between the start and the finish, the race brings runners east through the forest and the area known as the Poudre River Canyon, which is Colorado’s only National Heritage Area and was also designated as the state’s first National Wild and Scenic River back in 1986, thanks in large part to the innovations that early settlers developed in its water delivery systems along the river for the surrounding towns and communities.

Hiking and mountain biking are also popular within the 45-mile-long area, which stretches west from Greeley into the Roosevelt National Forest.

Runners will start the race at an elevation of nearly 5,900 feet above sea level, and from there it’s quite literally all downhill from there, as the race heads east along Highway 14 toward Bellvue and the finish line near Ted’s Place, which lies at the intersection of Highways 14 and 287 — making it an excellent opportunity to record a PR time for many.

The course will be closed to car traffic during the race, and the surface will be paved asphalt highways throughout the race.

Located just east of the Roosevelt National Forest in central northern Colorado, about a 15-minute drive west from Fort Collins and roughly 70 miles north of Denver, Bellvue typically sees some of its mildest weather of the year in September, which has brought record temperatures here as low as 18°F (in 1985) and as high as 97°F (in 1990).

See the race route map for the Equinox Half Marathon here.

To reserve your spot in the 2023 running of the Equinox Half Marathon & 5-Mile Run race, register online at RaceEntry.com here.