Voted the state’s number-one half marathon by Colorado Running Magazine readers, the Horsetooth Half Marathon is a point-to-point half that starts runners in the shadows of nearby Horsetooth State Park on a course that includes both paved surfaces and bike trails, with some steep hills and elevation changes.

The Horestooth Half Marathon course offers stunning views of the Fort Collins skyline between the iconic peaks of Horsetooth Mountain and Arthur’s Rock. The opening five miles of the course will deliver these views across azure waters as you make your way along the eastern shoreline of Horsetooth Reservoir on the hills of Centennial Drive.

The start of the race begins at 5,195 feet above sea level and takes runners on a nearly 500-ft. climb to the top of “Monster Mountain” at mile 1.7. After the big opening climb, the course follows the eastern shoreline of Horsetooth Reservoir, rolling past the ‘A’ Hill and North Dam Hill (5,579′).

Runners begin their eastward journey to the finish at New Belgium Brewery with the final climb of the course over Bingham Hill (5,252′), before beginning a long, gradual descent on the Cache la Poudre recreational trail into the finish line party and post-race expo in downtown Fort Collins. 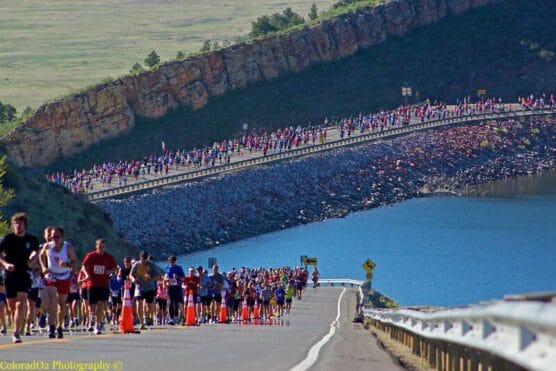 The party includes free beer for those over 21, post-race food, raucous live music from the Swashbuckling Doctors, and giveaways at the sponsor expo and awards ceremony. Once you’ve had your fill, jump on a free shuttle bus back to Hughes Stadium to pick up your car.

The starting line is located at Colorado State University’s Hughes Stadium on the western side of town, and from there runners travel northward past Horsetooth Reservoir toward the towns of Bellvue and Laporte, where participants a brief detour (about 200 yards) onto the Overland Trail and then make an eastward turn onto the Poudre River bike path, which they take toward Fort Collins.

From there, the course follows the bike path into town to College Avenue and to Linden Street, where the finish line lies at the New Belgium Brewery.

Located along the front range of the Rocky Mountains in northern Colorado, about 65 miles north of Denver and roughly 45 miles south of Cheyenne, Wyo., Fort Collins typically sees cold to mild weather in April, which typically sees temperatures ranging from the low 40s to the upper 70s.

See the race route map for the Horsetooth Half Marathon here.

To reserve your spot in the 2023 running of Fort Collins’s Horsetooth Half Marathon race, register online at RunSignUp.com here.

Ever run in the Horsetooth Half Marathon? Share your impressions here, or post your review in the Comments below.