Take a summertime run through Colorado’s Vail Ski Resort at the La Sportiva Vail Half Marathon, which welcomes around 200 runners each year for a trail half-marathon along the popular paths along both the front side and the back bowls area of Vail Mountain.


As a point-to-point race — filled with rolling hills, some scrambling downhills, and roughly 4,000 feet in elevation change — among the mountain ridges overlooking the stretch of Interstate 70 near Vail, the race almost resembles a closed loop race — the start and the finish lines are actually not that far apart.

The starting line lies in the Vail Village, just behind the Gold Peak Children’s Center, and runners follow the trail from there along the winding Mill Creek Road, which follows a number of twists and turns on its way uphill into the mountains above the village.

The natural-surface trail — which features plenty of dirt, rocks and tree roots as well as wide-open grassy areas — takes runners past a number of the Vail ski slopes on its eastward path along the front side of the mountains.

Runners follow this part of the trail along the front side for roughly eight miles, and reach the turn that takes them along part of the Vail Mountain area’s Elk Connector Trail just as they’re passing the third aid station, before the 9-mile marker.

Once around the turn, runners head into the back bowls area of Vail, which skiing enthusiasts and frequent visitors to the area will know well, including China Bowl, Sunup Bowl and Sundown Bowl.

Along the way, runners will encounter some short scrambles downhill (particularly between miles 10 and 11), and will need to exercise caution on the downhills. The course then takes runners up over Vail Mountain, reaching an elevation of more than 11,220 feet above sea level.

From there, it’s downhill toward the finish line at Eagles Nest, which lies at an elevation of just over 10,000 feet. Needless to say, runners need to be ready for a high-elevation race at the Vail Half Marathon, and race organizers recommend arriving at least a full day in advance of the race to give your body time to acclimate to the elevation.

This race is one tough half marathon, readers should know (one blogger called it “the hardest half-marathon around”), so make sure you’re fully prepared for an up-and-down, high-elevation race with lots of uneven terrain and a fair amount of scrambling along the trail. 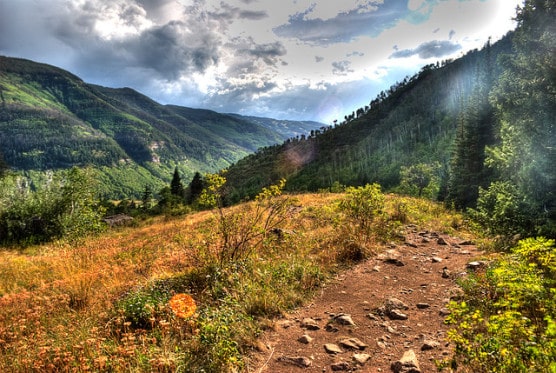 Nestled high among the ski resort towns in the Colorado Rocky Mountains west of Denver, about 100 miles from that city’s downtown area, Vail typically sees mild to moderately cool weather in July, when average monthly temperatures range between 40°F and 75°F and rainfall totals average around 2.24 inches for the month.

See the race route map for the La Sportiva Vail Half Marathon here.

To reserve your spot in the summer 2016 running of Vail’s La Sportiva Vail Half Marathon, register online at the event website here.

Ever run in the La Sportiva Vail Half Marathon? Share your impressions here, or post your review in the Comments below.