Set among the towering peaks of the San Juan Mountains in southwestern Colorado, the mountain town of Durango is the home for the Steamworks Half Marathon, a high-elevation 13.1-mile race that takes runners through the river valley of the same name.


Runners need to be ready for a high elevation race at this event, as Durango sits at just over 6,500 feet above sea level, and the race takes runners alongside the Animas River that cuts a ribbon-like path through the valley just north of the town center.

Bus transportation is provided to ferry runners from Durango to the starting line at Bakers Bridge, just off Highway 550 near Treasure Pass and Bell Canyon.

From there, the point-to-point course follows a thirteen-mile route through the valley through Pinkerton Hot Springs, Elkhorn Canyon, Freed Canyon and Woodard Canyon, all the way south toward the finish line near the Durango Sports Club on County Road 250, also known as Florida Road.

Along the winding route through canyons and river valley areas, runners need to note that they’ll be running on highways that will remain open to two-way traffic, so caution must be exercised at all times during the race. Runners will run the course against oncoming traffic, along paved surfaces throughout the race.

The course also takes runners through an area known to locals as Missionary Ridge, which occasionally experiences heavy flooding due to rains; if the roads through this area are closed due to weather conditions, the race may be cancelled or postponed.

Anyone who has seen the famous Paul Newman-Robert Redford film Butch Cassidy and the Sundance Kid will be familiar with the scenery throughout the race, especially at the starting line, as it was used for exterior scenes for the 1969 film.

And though the course is run at a high elevation, the hills runners can expect to encounter are generally mild to rolling hills, and the race also has plenty of flat stretches along the course.

Runners should note that while the roadways on which the race will be run are not heavily trafficked highways, they will be open to two-way vehicle traffic during the race, so participants will need to be alert during the event. 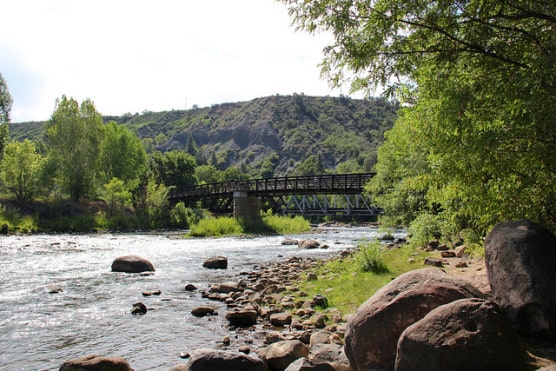 The Animas River in Durango, Colorado. (Photo by daveynin/flickr)

The early days of summer usually bring mild to moderately warm weather conditions to the Durango area, located in southwestern Colorado, about three and a half hours south of Grand Junction.

See the race route map for the Steamworks Half Marathon here.

To reserve your spot in the 2022 running of Durango’s Steamworks Half Marathon, register online at RunSignUp.com here.

Ever run in the Steamworks Half Marathon? Share your impressions here, or post your review in the Comments below.