I’m not sure there’s a more unique calling card for a race than the one offered by the Essex Steam Train Half — that when you’re out on the course, running your 13.1 miles, you’ll race an actual, live steam train that will be chugging its way toward the half-way turnaround point (as shown in the photo below).

You’ll start the out-and-back course for the race in Essex at the Steam Train & Riverboat station, which is part of the Connecticut Valley Railroad State Park that is home to the 1892-era train, on which tourists can take a 12-mile, 2 1/2-hour tour of the area.

From there, you’ll make your way through downtown Essex — along Prospect Street and Main Street, where you’ll run a short out-and-back that takes you to the Essex Town Dock, which overlooks the Connecticut River and Middle Cove.

After that, you’ll head north through less developed areas, all the way toward Deep River Landing, which lies also along the river. All during this time, the train will be slowly chugging northward along the Connecticut Valley Railroad State Park Trail, to meet up with you at Deep River.

Once you make the turnaround at Deep River Landing, you’ll head back south again, along Essex Street and Book Hill Road, and later onto Dennison Road and Main Street, back toward the train station for the race finish. 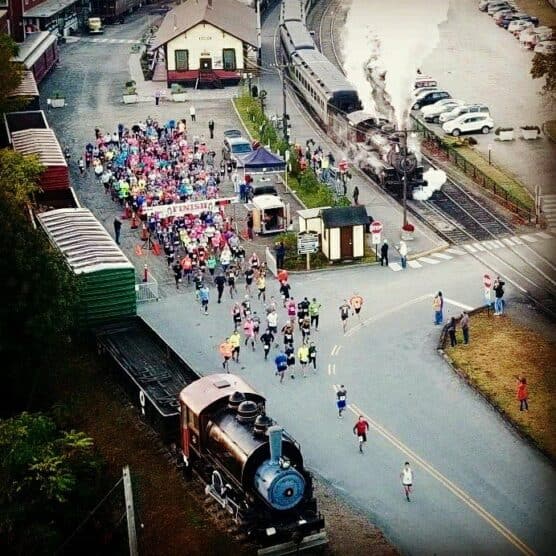 Nestled along the Connecticut River and just miles from the shoreline of Long Island Sound, about a 40-minute drive south from Hartford, Essex typically sees still quite cool weather in late March, when temperatures average between the low 40s and the upper 50s, and snow can still be possible.

See the race route map for the Steam Train Half Marathon here.

To reserve your spot in the spring 2023 running of Essex’s Steam Train Half Marathon, register online at RunSignUp.com here.

Ever run in the Essex Steam Train Half Marathon? Share your impressions here, especially anything about the course or terrain you think other runners might want to know.