Set for its second annual running along the Connecticut coastline just outside the home of Yale University, in a town of just over 20,000 that’s been named one of the nation’s best places to live by Money magazine, the Faxon Law Guilford Half Marathon takes runners an out-and-back course that starts and finishes at the Guilford Fairgrounds.


From the fairgrounds, the race unfolds along three long out-and-back stretches, the first of which runs along Water Street and Colonial Road out to Sachem’s Head, where you’ll see Hatch Rock, Jefferson Rock and Bloody Cove off in the distance from the course.

You’ll run over a bridge just before passing by the Marietta Museum of Art & Whimsy, and then follow the route back up Colonial Road to Water Street, before turning on Mulberry Point Road into the area known as the Cove.

The next stretch heads all the way out to Mulberry Point and Tuttles Point, where you’ll get to take in beautifully scenic views of the rocks way out in the water of Guilford Harbor.

Next, you’ll run north again, back into the town of Guilford and then out to the Guilford Docks, this time running along High Street and Whitfield Street, making a turnaround at the docks before heading back north along Whitfield.

The final stretch will bring you back to the Guilford Fairgrounds for the race finish, where the post-race party will begin around 9:15 AM and the awards ceremony will start at 10:45 AM.

The race is limited to the first 1,200 entrants, so runners are encouraged to sign up early. 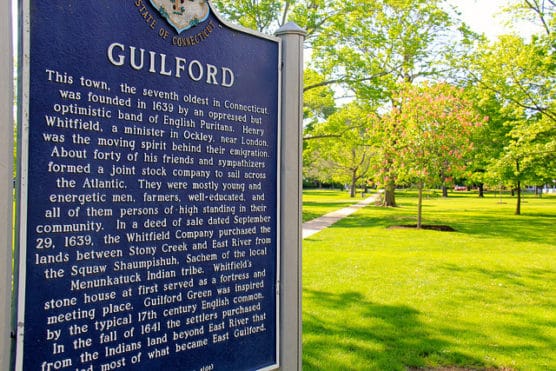 Nestled along the coast of Connecticut, just a short drive east from nearby New Haven and roughly 95 miles from New York City, Guilford typically sees cool to cold temperatures in November, and snowfall is also a possibility, as the town receives an average of 1.5 inches during the month.

See the race route map for the Faxon Law Guilford Half Marathon here.

To reserve your spot in the 2017 running of the Faxon Law Guilford Half Marathon race, register online at Active.com here.

Ever run in the Guilford Half Marathon? Share your impressions here, or post your review in the Comments below.