Runners get the chance to trek through the gorgeous, challenging hills of this corner of New England backcountry as well as take in both colonial American and Native American history at the Hamden Hills Half Marathon & 5K, which is set for its 11th annual running on the last weekend of May 2023.

The race will take the field of runners through the part of southern Connecticut known as the “land of the Sleeping Giant,” named for the stretch of mountains about eight miles north of New Haven that actually looks like a giant asleep on the ground (you can learn more about its history and the legend of the Sleeping Giant at Damned Connecticut, a website devoted to weird and unexplained stories throughout the state).

In fact, the race will start just a few miles south of Sleeping Giant State Park where the giant himself lies, on the York Hill campus of Quinnipiac University (which, interestingly, is named for the Native American tribe that lived here in the 1630s, when the area was settled by the Puritans).

From the parking lot next to the university’s TD Bank North Sports Center, the course for the race heads south and west along Sherman Avenue, starting off with a sharp downhill in the first mile and continuing with more hills in the first few miles of the race.

Organizers describe the race route as “the toughest half marathon and 5K in Connecticut,” so expect plenty more hills as you continue heading southwest through the northern edges of Hamden and into the rural country roads just outside town.

The course continues heading west until runners make it into West Rock Ridge State Park, where they make a counter-clockwise loop around the northern end of the park before heading back onto Chauncey Road and Dunbar Hill Road, and then retrace their steps back to the Quinnipiac York Hill campus for the race finish.

While you’re in town, there’s also plenty of natural and historical sites to take in and see, from the Eli Whitney Museum (built on the site where Whitney originally built his armory to manufacture muskets for the army back in the late 1790s, and today features exhibitions and workshops for students and teachers on Whitney’s inventions) to the campus of Yale University, which lies just a short drive south from Hamden. 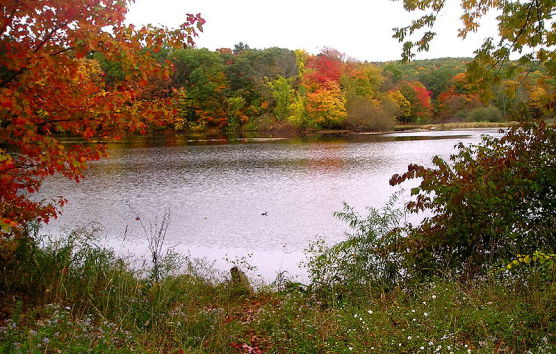 Clark’s Pond near the Quinnipiac University campus in Hamden, Connecticut. (Photo by Wikimedia)

See the race route map for the Hamden Hills Half Marathon here.

To reserve your spot in the spring 2023 running of the Hamden Hills Half Marathon or 5K race, visit the event website below.

Ever run in the Hamden Hills Half Marathon? Share your impressions here, or post your review in the Comments below.

See more races in: May, Connecticut