Set for its annual early spring running under its relatively new name — after being run last year in October, pushed back from March due to the coronavirus pandemic — the Savin Rock Marathon & Half Marathon takes runners for nearly a third of the race along the shoreline of Connecticut’s Long Island Sound coastline.

The race typically draws between 400 and 500 runners in both races combined each year — including between 250 and 300 finishers in the half marathon — for a race that follows an out-and-back course that starts and finishes on the Savin Rock Trail, named for the famous rock here that sits out on a peninsula that juts out into the sound.

From there, the race route follows a counter-clockwise loop through West Haven, which lies just a few miles south of New Haven, mostly through its residential neighborhoods and city parks.

Runners will get to see the water for both the opening mile and the final 2 1/2 miles of the race, as the course starts off by heading east along the Savin Rock shoreline trail and then heads onto Beach Street, taking them along the beachfront and then into Morse Park.

The final couple of miles feature the longest scenic stretch of the race, when runners leave Jones Hill Road about half-way between miles 10 and 11 and head onto Ocean Avenue, following the curve of the land back toward the beach and the shoreline trail.

Just before reaching the finish line, runners make a quick detour out onto the narrow peninsula to see the rock for which the area and the race is named, out in the sound just beyond the edge of the shore.

After that, runners have only about a half-mile left to make it back toward the Savin Rock Conference Center and the beachfront trail area, where the race finish line lies. 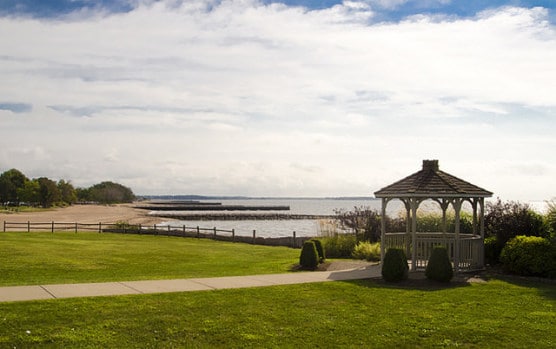 Located along the Long Island Sound coastline of southern Connecticut, about 40 miles southwest of Hartford and roughly 75 miles northeast of New York City, West Haven typically sees cold to occasionally cool weather in March during a month that brings average temperatures between 50ºF and 33ºF.

See the race route map for the Savin Rock Half Marathon here.

To reserve your spot in the fall 2023 running of West Haven’s Savin Rock Marathon or Half Marathon race, visit Active.com.

Ever run in the Savin Rock Half Marathon? Share your impressions here, or post your review in the Comments below.