The Reservoir Run Half Marathon & 5K

Runners get the chance to trek the country roads of this small, affluent town less than an hour outside New York City at Weston’s annual Reservoir Run Half Marathon, which unfolds along a loop route that passes by the Saugatuck Reservoir at its northernmost end in the first half of the race.


Planned as a fundraiser for the Weston Kiwanis Club to benefit the club’s foundation as well as the nonprofit organizations Purple Heart Homes and Eliminate, the race is expected to draw as many as 700 runners for its first running ever, which is set to start at 8:30 AM on the track and field oval at Weston High School, on School Road just off Newtown Turnpike.

From there, runners make a clockwise loop around this town of just over 10,000 residents, with tree-lined stretches that run past Devil’s Den Nature Preserve, the Morehouse Farm Park and Trout Brook Valley Preserve.

Between miles 4 and 6, the course features a run past the Saugatuck Reservoir — for which the race is named — a stretch where runners will get to see water rushing over the dam and into the Saugatuck River, with a boulder-lined waterfall between miles 6 and 7. 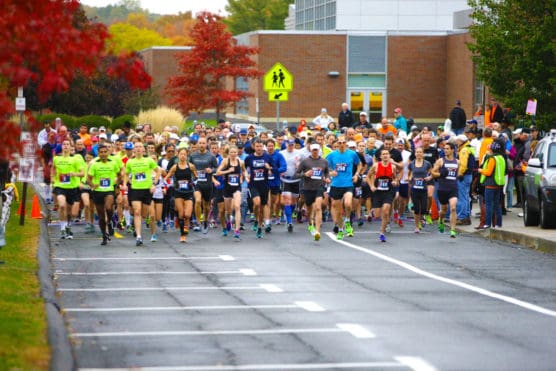 The course drops to Lyons Plains Road, a flat long stretch lined with 18th and 19th century historic homes and Emmanuel Church. Turning on to River Road you will cross the Saugatuck River and see a babbling waterfall and then shortly the Weston Grange and a water stop.

Once they make the turn onto Weston Road, there’s an uphill grade as the course heads toward Weston Center, which brings runners north back toward the school and through Weston’s tiny town center in the home stretch of the race.

The final mile finishes with the turn off School Road and into Weston High School’s football stadium, where runners will finish the race on the track and field oval with spectators cheering them on in the stands.

While they’re out on the course, runners can expect to see traffic as the roads won’t be closed, but they’re more likely to see bicycles than cars. You’ll also be passing by several celebrities homes, organizers add, as many make this their home away from work in nearby New York. 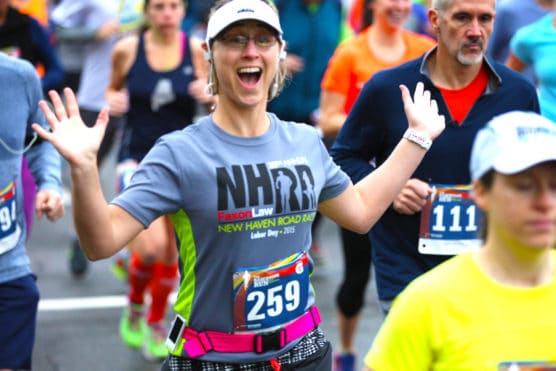 All photos courtesy The Reservoir Run

Located just miles from the Long Island Sound shoreline in southwestern Connecticut, about 65 miles southwest of Hartford and roughly 45 miles northeast of New York City, Weston typically sees October temperatures that average between 40°F and 64°F, while precipitation amounts average just under 4 inches for the month.

See the race route map for the Reservoir Run Half Marathon here.

To reserve your spot in the 2022 running of Weston’s Reservoir Run Half Marathon or 5K race, register online at RunSignUp.com here.

Ever run in the Reservoir Run Half Marathon? Share your impressions here, as well as anything you learned about the race that you think other runners/walkers should know.