You’ll run across a bridge that features an eight-ft.-tall bronze statue of a frog perched atop a similarly giant thread spool at the Willimantic Frogtoberfest Half Marathon (formerly known as the Willimantic Classic Half Marathon in the spring), which takes runners on what is roughly a figure-eight-shaped course through the town of Willimantic, home to just over 17,000 people here in eastern Connecticut.


Run as a benefit for the Windham Region No-Freeze Hospitality Center — which provides a safe, clean, warm alternative for the area’s homeless, many of whom camp along the Willimantic River all year long — the race starts and finishes near the banks of the river downtown, at Jillson Square near the Main Street historic district.

Start and finish in downtown square. From there, the course unfolds first along Main Street and then crosses over the river at Bridge Street, taking runners past the Connecticut Eastern Railroad Museum before heading over the river.

That’s followed by a stretch along Pleasant Street and Kingsley Road, and then a nearly mile-long stretch along Willimantic’s historic Airline rail trail, now a 50-mile-long trail that stretches between East Hampton and Putnam, Conn.

The trail was built on the old Air Line railway from 1872, which back then was the shortest route between Boston and New York. After floods in the 1950s destroyed some of its bridges, the railroad was abandoned until decades later, when it was rebuilt as a mile-wide gravel trail for running, walking, biking and hiking.

Once runners hit Village Hill Road, they’ll exit the trail and turn right, and head back north toward the river along Cards Mill, Baker Hill and Kingsley Roads.

You’ll run across the “Frog Bridge.” Then, they’ll run past Guild Field and Young Field before heading back across the river over the famous South Street Bridge, also known as the Frog Bridge, where they’ll pass one of the town’s best-known landmarks, the frog statue where Main Street meets South Street.

A tribute to the town’s heyday as a cotton thread and silk manufacturing center — as well as to the legendary Windham Frog Fight of 1754, when a drought forced every frog in the nearby area to seek out the only remaining water in a small pool here, as the story goes — the statue also marks roughly the mid-way point of the half marathon.

After that, runners will make their way around the city in a big clockwise loop, past both residential blocks and rural areas on the outskirts of town, before heading back to Jillson Square in downtown Willimantic for the race finish. 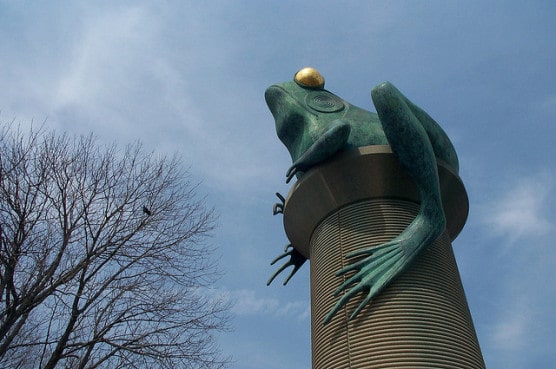 Looking up at the Frog Bridge in Willimantic, Connecticut. (Photo by susteph/flickr)

See the race route map for the Willimantic Frogtoberfest Half Marathon here.

To reserve your spot in the 2020 running of the Willimantic Frogtoberfest 13.1 Half Marathon or 10K race, register online at LightBoxReg.com here.

Ever run in the Willimantic Frogtoberfest Half Marathon? Share your impressions here, or post your review in the Comments below.