Set for its 57th annual running through the streets of Delaware’s largest city, the Caesar Rodney Half Marathon & 5K takes runners on an out-and-back tour of the city, with much of the course unfolding along the banks of the Christina River and Brandywine Creek.

More than 1,400 runners and walkers crossed the finish line each year at this event, which also serves as a fundraiser for the Delaware chapter of the American Lung Association, whose programs promote clean air, the prevention of lung disease and fight the environmental conditions and pollutants that cause lung disease in the Delaware, New Jersey, Pennsylvania and West Virginia areas.

The race is often described as “the granddaddy of Delaware road races” thanks to its long history here, and often draws runners from as many as 20 countries around the world each year — and at more than half a century old, it’s been called the oldest continuously running half marathon in the nation.

Runners start and finish the out-and-back course for the race in downtown Wilmington near Rodney Square, and from there head out for stretches along Brandywine Creek and the river, including stretches that run past the Russell Peterson Wildlife Refuge, Brandywine Park and Rockford Park.

Organizers note also that unless there’s a state of emergency or other warning issued by the National Weather Service that indicates conditions are too hazardous to run the race, “we run in all weather.” 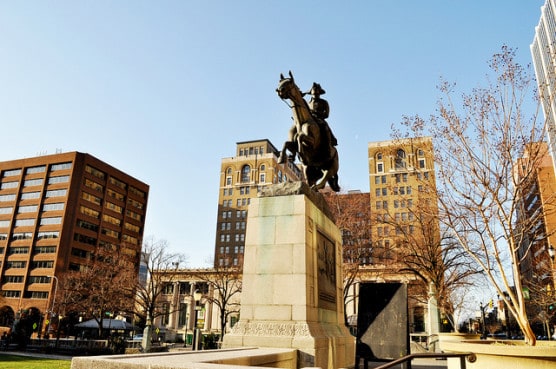 Nestled along the winding Christina River in the northern corner of the state, Wilmington typically sees March temperatures that average between 33°F and 51°F, while precipitation amounts average just over 3.8 inches for the month.

See the race route map for the Caesar Rodney Half Marathon here.

To reserve your spot in the early spring 2020 running of Wilmington’s Caesar Rodney Half Marathon or 5K race, register online at RunSignUp.com here.

Ever run in the Caesar Rodney Half Marathon? Share your impressions here, or post your review in the Comments box below.