Featuring two and a half miles of running along the sands of Jacksonville’s beaches and an opportunity to support one of the running world’s most significant charitable fundraising efforts, the 26.2 With Donna National Marathon to Finish Breast Cancer marks its 16th annual running this year.

Both the half and the full marathons in this event start and finish at the Beaches Town Center, near where Atlantic and Neptune Beaches meet, and take runners for the early part of the race along the beach communities of Neptune Beach, Jacksonville Beach and Atlantic Beach.

From there, runners start heading west along Atlantic Boulevard briefly before heading north into the oceanfront neighborhoods of Atlantic Beach, turning on Sailfish Drive and then right again on to Plaza.

The route takes a few more turns as it heads into residential neighborhoods and along the beach before heading back to the finish line at the Beaches Town Center.

Proceeds from the race will benefit the Donna Foundation, begun by two-time breast cancer survivor Donna Deegan, a well-known Jacksonville local television anchor who has completed several marathons after being diagnosed with breast cancer and serves as an inspiration to women Finishing the disease around the country. Race organizers note that the course is pink–very pink. While the full marathon is open to runners only, the half marathon will be open to both runners and walkers, provided they can complete the race within the seven-hour time limit. 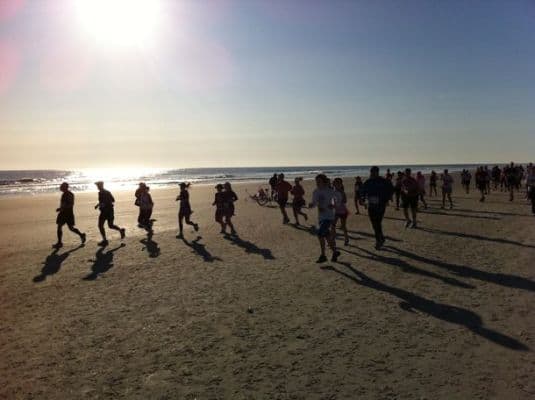 Runners on the beach at Jacksonville’s 26.2 With Donna Half Marathon.

Nestled along Florida’s Atlantic coastline in the northeast corner of the state, just miles from the Georgia state line, the city of Jacksonville typically enjoys mild to moderately cool weather conditions in the late winter months, with rainfall that’s generally much lower than in the summer and early fall.

In February, the city’s average monthly temperatures range between 48°F and 65°F, while rainfall averages just over 2.8 inches, making February its third-driest month of the year.

See the race route map for the Donna Half Marathon here.

To reserve your spot in the late winter 2023 running of Jacksonville’s Donna National Marathon to Finish Breast Cancer, register online at Active.com here.

Ever run in the Donna Half Marathon? Share your impressions here, or post your review in the Comments box below.