The long, wide white-sand beaches of Florida’s Fort De Soto Park, located just a few miles southwest of St. Petersburg, are the setting for the the Florida Shamrock Halfathon, 10K & 5K race, which will mark its 13th annual running this year, for a race that draws about 1,000 runners each year for both races combined.

Runners follow an out-and-back course along straightaway stretches on the wide, white-sand beaches and dunes that this area is known for, as well as stretches through the tree-lined park areas in the park. And for runners who’ve taken part in the annual fall Florida Halloween Halfathon, the course will be very familiar — they’re run on the same route through the park.

Fort De Soto Park has attracted attention in recent years from being named by Dr. Steven Leatherman, also known as “Dr. Beach,” to the top spot on his annual list of the nation’s top beach destinations, based on their ample opportunities for swimming and recreation as well as how well they are cared for ecologically by their facilities and management organizations.

The park also has garnered the top honors in the list of America’s best beaches by TripAdvisor, in both 2008 and 2009.

For those taking part in the half marathon and the 5K, the race begins at the North Beach area of Fort De Soto Park, and both races take runners along a combination of paved park roadways and recreational trails along the beach areas. The course for the half marathon is largely flat for virtually the entire race, though runners can expect minimal rolling hills.

After the start at North Beach, runners follow the route through the parking lot area out onto Anderson Boulevard, which they run until just after the mile 1 marker and then hit the turnaround point, after which they head back northward along Anderson and take a detour into the more forested areas of the park for a brief loop.

Then it’s back out onto Anderson along the route they’ve just run back around to North Beach, where they then head southward for the next 10 miles of the race.

The next stretch of the race follows a long out-and-back route along the southern end of the park, along the recreational trails that parallel the beaches. Sandy and flat, these trails will feature some of the race’s most beautiful views, looking out on either side to both Mullet Key Bayou and Tampa Bay.

After reaching the turnaround point around the mile 8 marker, runners then head back along the route they’ve just covered, all the way back to the finish line at the park’s North Beach. 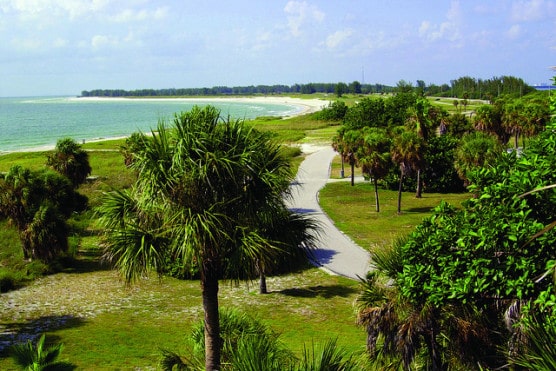 Located along Florida’s Gulf coastline, Tierra Verde typically experiences mild to moderately warm weather conditions in the early spring season, as well as generally drier weather in the spring than in the summer. In March, temperatures average between 60°F and 75°F, while rainfall totals average just under 3.3 inches for the month.

To reserve your spot in the 2023 running of St. Petersburg’s Florida Shamrock Halfathon or 5K race, visit the event website below.

Ever run in the Florida Shamrock Halfathon? Share your impressions here, or post your review in the Comments below.