Inspired by the hit reality television series, the Biggest Loser Run/Walk race series got its start in the second half of 2012 with a series of 5K, 10K and 15K races as well as its first half marathon, which makes its 3rd annual running this year along the coastline of Florida’s Panama City Beach, along a fast, flat route that will no doubt make a great 13.1-miler for any first-time half marathoner.


The race series — which now includes half marathons in Illinois, New Mexico, New York, Pennsylvania and Vermont — is aimed, like the television series, at inspiring people who’ve neglected their health and fitness with events that are open to both runners and walkers, and feature less challenging (read: easier) courses, especially like the fast, flat terrain of Florida’s Gulf coast.

Runners will start the Panama City Beach half marathon at Pier Park, where after the race runners and spectators can take in the entertainment complex’s shops and boutiques and movie theater, or take a walk immediately after the finish on the Russell-Fields Pier, which extends out into the Gulf waters and opened on the 4th of July in 2009.

Following the start, runners and walkers will head from Pier Park toward the water at Lullwater Beach, and then turn right onto Front Beach Road. They’ll head northwest along Front Beach for roughly the next 6 1/2 miles, along a course that unfolds right on the beachfront, with the waves coming in over runners’ left shoulders the entire first half of the race. You’ll pass by beachfront condo complexes and residential neighborhoods, past high-rises and the blue-green waters of the Gulf of Mexico.

Once you reach the half-way turnaround point near the intersection with Palm Beach Drive, just past the Kiska Beach and Hollywood Beach neighborhoods, the course then heads back along the route runners just ran, in reverse all the way back to Pier Park. Runners will cross the race finish line back along Pier Park Drive, just after the turn from Front Beach Road.

Every runner and walker who completes the race within the course time limit of 5 hours will receive a finisher’s medal, and the race will also present age group awards to the top three finishers in each of 13 age divisions (14 and under, 15 to 19, 20 to 24, etc., all the way up to age 70 and above). 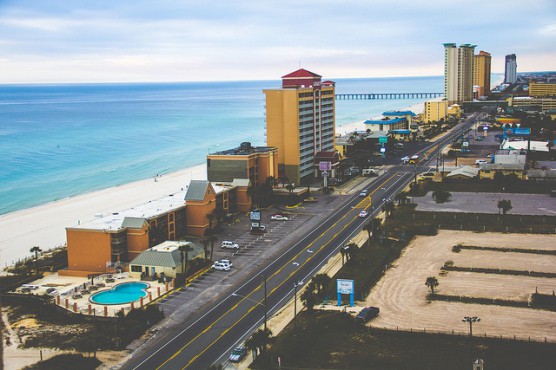 Nestled along Florida’s Gulf coastline, about 90 miles east of Pensacola and roughly 100 miles west of Tallahassee, Panama City Beach typically sees December temperatures that average between 40°F and 64°F, while precipitation amounts average just over 4 inches, making December one of the city’s driest months of the year.

To reserve your spot in the early winter 2014 running of Panama City Beach’s Biggest Loser Run/Walk Half Marathon or 5K, register online at Active.com here.

Ever run in the Biggest Loser Panama City Beach Half Marathon? Share your impressions here, or post your review in the Comments box below.