Set for its 7th annual running this year on a course that features two and a half miles of running on the sands of Florida’s Cocoa Beach itself, the Ron Jon Cocoa Beach Half Marathon and Relay features a fast, flat route that’s open to both runners and walkers, and a chance to run with waves crashing along the shoreline over your shoulder.


The race, which unfolds along the region known as Florida’s Space Coast near Cape Canaveral — and features finisher’s medals in the shape of the bottle made famous in the legendary 1960s TV series “I Dream of Jeannie” — starts along Florida State Road A1A, near Patrick Air Force Base and Hangar’s Beach.

From there, the race heads north along A1A, which stretches all the way from the tip of the Florida Keys at its southernmost end all the way north to Amelia Island near the Georgia state line at its northern end.

You’ll follow A1A for nearly the first eight miles of the race, passing through the city of Cocoa Beach, the Maritime Hammock Preserve and Lori Wilson Park before you reach the first turn, just before the mile 8 marker at Hernando Lane, where you’ll also pass by the world-famous Ron Jon Surf Shop.

Once there, you’ll make the turn and head east toward the beach, but not before you make an out-and-back stretch along Ocean Beach Boulevard. Then, you’ll turn right on Marion Lane to head out onto the beach.

On the beach, you’ll head south, running on the sand with the waves crashing onshore over your left shoulder. You’ll run for roughly 2 1/2 miles along the beach, all the way south to the Minuteman Causeway.

There, you’ll turn right and leave the beach as you make your way back onto A1A (called North Orlando Avenue here), which will take you north toward Lori Wilson Park, where you’ll finish the race inside the park. 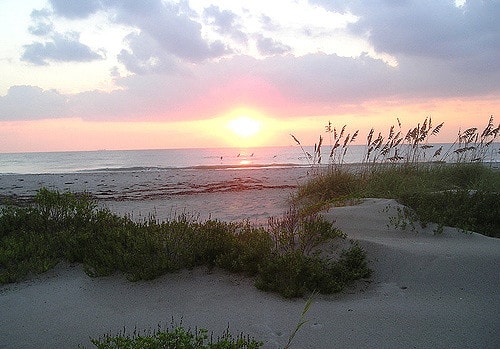 See the race route map for the Cocoa Beach Half Marathon here.

To reserve your spot in the 2022 running of the Ron Jon Cocoa Beach Half Marathon or Relay, register online at HakuApp.com here.

Ever run in the Cocoa Beach Half Marathon? Share your impressions here, as well as anything you learned about the race that you think other runners/walkers should know.