Runners get a chance to run through the campus of the University of Florida and the city streets of Gainesville at the Five Points of Life Half Marathon & Relay, which draws more than 1,000 runners each year to the streets of the city for a race that raises money and awareness for the local nonprofit by the same name, and for the need for donations of blood, apheresis, bone marrow, cord blood, organ and tissue.


Run along mostly flat terrain, the race begins at the Hippodrome Theatre in downtown Gainesville. From there the half marathon course takes runners on a loop course through the city, finishing back near the start at the theatre. The 5K and kids marathon races take place on Saturday, while the full marathon, half marathon and marathon relay races are run on Sunday.

From the starting line, runners follow a course that takes them in roughly a clockwise direction through the city, running past a part of downtown Gainesville known as Bed and Breakfast Row thanks to the classical Victorian homes lining the street.

After this scenic start, the course continues around Depot Park and west on Depot Avenue, continuing west as you cross the Helyx Bridge, a pedestrian overpass designed to look like a strand of DNA.

As the course continues onto the University of Florida campus, it take runners past the shore of Lake Alice, right in the middle of campus, and down along Museum Road. Pay attention–you might see some real alligators swimming in the water.

The course keeps going around Griffin Stadium, and as it does, the race becomes hillier, as participants enter the section of the course that was used by Frank Shorter, who graduated from the University of Florida and used 16th Street’s historic hills as his training ground for the 1972 Olympics, where he won the gold medal in the marathon.

After the long straightaway stretch along 16th, the course starts taking more frequent turns as runners head back to downtown Gainesville for the finish at the theatre.

There’s a time limit of 3 hours, 30 minutes for the half marathon. There will also be a 5K race for runners and a kids marathon, who spend the weeks and months before the race logging 25 miles to run the last mile of their “marathon” on the day of the event. 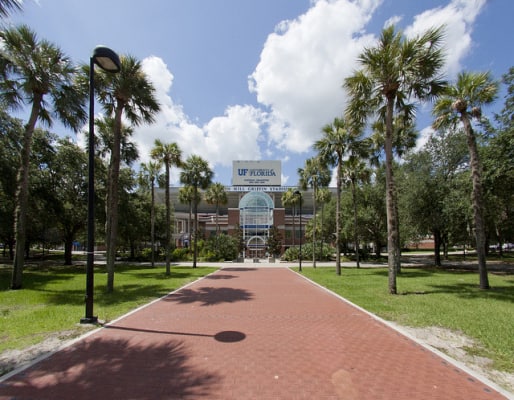 Located in the northern part of the state, about a two-hour drive north of Orlando, the city of Gainesville typically experiences mild to cool weather conditions in the late winter, with moderate rainfall. In February, average monthly temperatures range between 46°F and 69°F, while precipitation amounts average about 3.9 inches for the month.

See the race route map for the Five Points of Life Half Marathon here.

To reserve your spot in the 2020 running of Gainesville’s Five Points of Life Half Marathon, 5K or Relay race, register online at RunSignUp.com here.

Ever run in the Five Points of Life Half Marathon? Share your impressions here, or post your review in the Comments box below.