Take a run through the “City of Palms” at the Fort Myers Half, a counterpart race to the fall Fort Myers Marathon and one that takes runners along a mostly fast and flat course through downtown, over the Caloosahatchee River a couple of times, and through a series of residential neighborhoods, all on a course that’s perfect for recording a great finishing time.


Start downtown at Centennial Park. The race will begin next to the park on West First Street in downtown Fort Myers, a city of more than 77,000 here in southwest Florida, and has been famous historically for being the home of the winter estates of Thomas Edison and Henry Ford, among others.

From there, runners will make their way east through downtown around the edge of the downtown historic district, on their way back around to First Street. Once they make it there, they’ll head south near the coast through a series of residential neighborhoods for an out-and-back section of the course.

Across two bridges for the second half. Once you make it back near the start, you’ll cross the Caloosahatchee River twice in relatively quick succession, first by heading north along the Cleveland Bridge, then heading south again almost immediately along the Edison Bridge before coasting to the finish line. 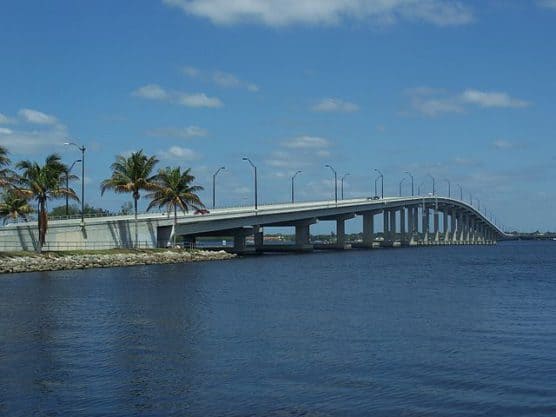 The Edison Bridge over the Caloosahatchee River in Fort Myers, which you’ll run across twice in the first half of the race (Photo courtesy Wikimedia/Ebyabe)

Nestled along the Caloosahatchee River in South Florida, roughly 125 miles south of Tampa and about 160 miles northwest of Miami, Fort Myers typically sees mild temperatures (between the lower 60s and the upper 70s to 80 degrees) in November, which also brings some of the area’s driest weather of the year.

See the race route map for the Fort Myers Half Marathon here.

To reserve your spot in the 2018 running of the Fort Myers Half Marathon or 5K raace, register online at Hakuapp.com here.

Ever run in the Fort Myers Half Marathon? Share your impressions here, as well as anything you learned about the race that you think other runners/walkers should know.