Nestled among the Florida Keys, at roughly the half-way point of the drive from Miami to Key West, the village of islands that make up what is known today as Islamorada play host to their fifth annual half marathon this December, for an event that drew more than 500 runners last year.

Known by its earliest settlers as “Island Home” and “the Purple Isle,” Islamorada (pronounced eye-la-mor-AH-da) is perhaps best known for its sport fishing, which has made it a mecca for the likes of former president George H.W. Bush and baseball legend Ted Williams, who came here for fishing trips for more than 40 years.

The race begins at Robbie’s of Islamorada along Highway 1, also known as the “Overseas Highway” as it’s the main route through the islands that make up the Keys.

From there, the course unfolds for much of the race along Highway 1, also known as the Overseas Highway. Fast and flat thanks to its low-lying location – most of the course lies at just a few feet above sea level – the race features a few small bridges and stretches along bike paths in addition to its (mostly) road miles.

This area was among the hardest-hit by the infamous 1935 Labor Day Hurricane, the most intense hurricane in recorded weather history to make landfall in the U.S. More than 400 people in Islamorada alone were lost in the storm, and their lives are memorialized in the Hurricane Monument on Upper Matecombe Key.

There are only a handful of turns throughout the race route, which also makes a brief stretch past Lignumvitae Key Botanical State Park on Lower Matecombe Key, a small island accessible only by boat and known for its virgin tropical forest and the crystal blue waters along its coastline.

Along the way, you’ll pass by much of the scenery for which this island is so well-known (you’ll run largely along Upper and Lower Matecombe Keys during the race) including its plentiful shops, art galleries and restaurants and a stretch of the “Old Road,” before heading back to Robbie’s for the race finish, where you’ll cross the finish line on the beach. 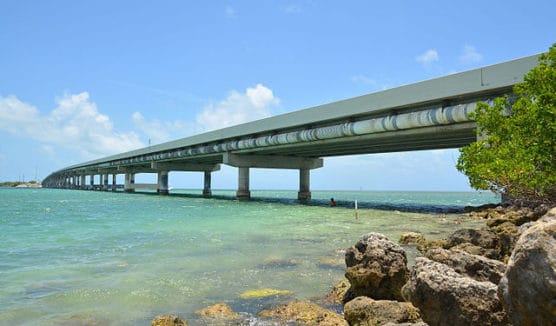 Located roughly between mile markers 95 and 75 in the “Upper Keys” region of the Florida Keys, Islamorada sees some of its driest and coolest weather of the year in December, which averages between a low of about 65ºF and a high of about 77ºF.

See the race route map for the Islamorada Half Marathon here.

To reserve your spot in the 2023 running of the Islamorada Half Marathon or 10K race, register online at RunSignUp.com here.

Ever run in the Islamorada Half Marathon? Share your impressions here, or post your review in the Comments below.