Runners get the chance to trek along the flat, tree-lined streets that overlook the waters of Barfield Bay, Goodland Bay and Caxambas Bay — and make a pair of out-and-back bridge crossings — at the Marco Island Half Marathon Bridge Run & 5K, which marks its 8th annual running as winter is giving way to spring in mid-March.


The race is set along the northernmost of what is known here as the Ten Thousand Islands of the Florida Gulf coast, a chain of barrier islands and mangrove islets that stretch from where Lostmans River empties into the Gulf of Mexico in the Everglades north all the way to Cape Romano, at the southern end of Marco Island.

Known for its white sand beaches and high-end resorts, Marco Island is a mecca year-round for golfing, boating and fishing and also is known for its “Old Florida” feel and architectural styles.

Starting from the Shops at San Marco — which lies at the intersection of Barfield Drive and San Marco Road on the eastern side of Marco Island — runners head out east along San Marco Road for nearly the first two miles of the race, with the waters of Barfield Bay over their right shoulders.

The course makes its first turn right onto Whiskey Creek Road, which starts a stretch with some rolling hills but mostly quiet, peaceful stretches dotted with homes and there along the single road that leads out to the end of the peninsula.

Runners turn again right onto Bluehill Creek Drive and follow it all the way to the race’s first turnaround point, between mile markers 4 and 5, near the end of the point of land that sticks out into Caxambas Bay.

From there, runners then turn around and head back along the route they’ve just run, following Bluehill Creek and Whiskey Creek Drive all the way north back toward San Marco Road, getting a second look at the large island homes tucked into mostly forested areas here.

The course also makes its second run over the Whiskey Creek Drive bridge around the mile 7 marker, and then turns right to get back onto San Marco Road heading east. This stretch takes runners east toward Goodland Bay, where they’ll run over the bridge that looks out into the bay waters on San Marco Road, heading nearly all the way across the bridge between mile markers 9 and 10.

There they’ll reach the race’s second turnaround point, and then head back across the bridge and continue west along San Marco Road (with a detour onto Sheffield Avenue), back toward the race finish line. 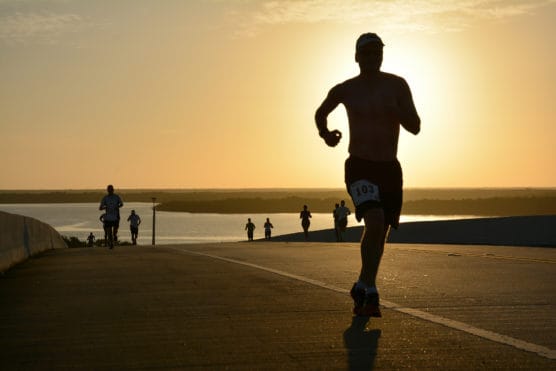 Nestled along the Gulf coastline near the southern tip of Florida, about 180 miles south of Tampa and roughly 110 miles west of Fort Lauderdale, Marco Island typically sees March temperatures that average between 58°F and 79°F, while rainfall totals average just over 2 inches for the month (the spring and winter here are much drier than the summer months).

See the race route map for the Marco Island Half Marathon here.

To reserve your spot in the early spring 2021 running of the Marco Island Half Marathon Bridge Run, register online at ChronoTrack.com here.

Ever run in the Marco Island Half Marathon? Share your impressions here, or post your review in the Comments below.