Runners will follow a course that takes them over two bridges and along Melbourne’s stretch of the scenic Indian River at the Publix Florida Marathon Weekend (Melbourne Music Marathon until 2016), which features a full marathon, half marathon, 10K, and 5K race distances.

The race features a course that’s largely fast and flat, the race will have a medium-sized field of runners — just over 950 runners crossed the finish line in the half marathon alone at the race’s 2016 running, out of a total of almost 1,200 runners in both the half and full combined.

From the starting line on Highway 192/Strawbridge Avenue, runners will head north along the old U.S. Highway 1, heading north for the first four miles of the race along the highway all the way up to the first turn on Shady Lane. After the first turn, runners make a few more turns and then head east across the first bridge of the race, crossing the river on Eau Gallie Boulevard and then turning onto Riverside Drive, all the while with the view of the flowing river over their shoulders and the sun in the sky overhead.

The course takes runners southward along Riverside for a four-mile straightaway stretch, giving runners more views of the river as they make their way along the race’s second half. Once runners hit the second bridge, at the intersection with 5th Avenue, they then make their way over the Melbourne Causeway back toward the finish line on New Haven Avenue.

All along the course, which is mostly flat except for the bridge crossings, runners will pass by 20 live bands playing for both the participants and spectators, as well as high-school cheerleading teams stationed throughout the course. 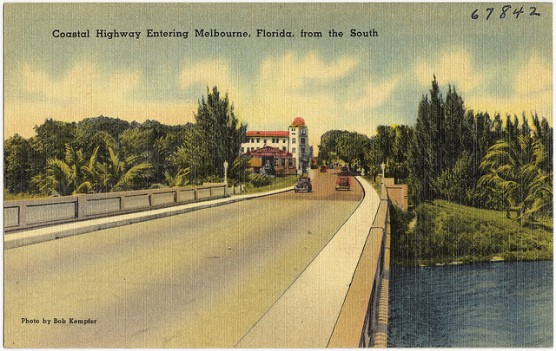 Located along central Florida’s Atlantic coastline, about 70 miles southeast of Orlando, the city of Melbourne typically experiences mild to moderately cool weather conditions in the late winter, with lower rainfall compared to the summer months.

In February, temperatures average between 51°F and 73°F, while rainfall totals average around 2.49 inches for the month. On the day of the race (Feb. 12), the average low is 50°F and the average high is 72°F.

See the race route map for the Publix Florida Half Marathon.

To reserve your spot in the 2023 running of the Publix Florida Marathon, Half Marathon, or 5K race, register online at HakuApp.com here.

Ever run in the Publix Florida Half Marathon? Share your impressions here, or post your review in the Comments box below.