A mostly fast and very flat — and highly scenic — run through the streets of Miami and Miami Beach await the more than 3,000 runners and walkers who come out each year for the 305 Half Marathon (known as the 13.1 Marathon Miami Beach & Life Time 5K before 2018), which is part of a seven-race series of half marathons across the country from March through November.

The Miami Beach race offers runners ample views of the ocean waves crashing against the shore and the art and architecture of the city’s world-famous South Beach, from the starting line along Ocean Drive, next to Lummus Park in South Beach.

The race is open to walkers as well as runners, provided that they can complete the race’s 13.1 miles within the three and a half-hour time limit. After this time, the course will be re-opened to automobile traffic and participants will be urged to use the greatest caution if they choose to continue after the time allotted.

Runners will cross over the Julia Tuttle Causeway, which takes them over the waters of Biscayne Bay, between mile markers 3 and 6. After the turnoff, they’ll run the next couple of miles along 2nd Avenue before turning back onto a second bridge that takes them again over the bay, this time across the MacArthur Causeway to South Pointe Park in Miami Beach.

More than 2,500 runners crossed the finish line in both the half marathon and the 5K combined in 2016, with just over 2,100 finishers in the half marathon alone. Runners are scheduled to start the race at 6:15 AM at the corner of Ocean Drive and 12th Street in Miami Beach. 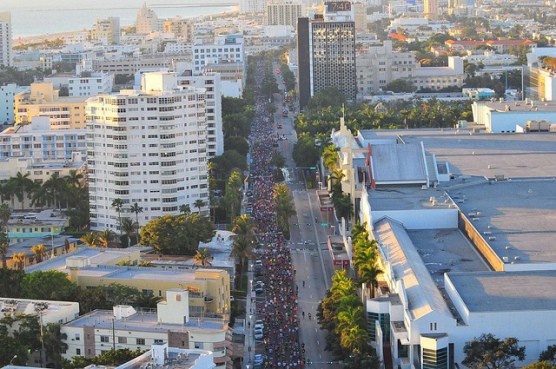 Located near the southern tip of Florida along the state’s Atlantic coastline, Miami Beach typically enjoys mild to moderately warm temperatures in the late winter and early spring months, and usually far drier weather this time of year than in the summer months, when rainfall is usually relatively heavy.

In March, temperatures average between 66°F and 75°F, while rainfall totals average around 2.2 inches, one of Miami’s driest months of the year. On the day of the race (March 5), the average low is 65°F and the average high is 74°F.

See the race route map for the 305 Half Marathon here.

To reserve your spot in the late winter 2023 running of Miami’s 305 Half Marathon or 5K race, register online at RunSignUp.com here.

Ever run in the 305 Half Marathon? Share your impressions here, or post your review in the Comments below.