Run along a fast and very flat out-and-back course through the area known to locals as the “Olde Naples” section of town, the Barron Collier Companies Naples Half Marathon (formerly known as the Naples Daily News Half Marathon) takes runners through the city streets, residential neighborhoods and waterfront districts of this south Florida city that lies near the state’s southern tip and just a short drive from perhaps its greatest ecological treasure, Everglades National Park.

Organized by the Gulf Coast Runners athletic club, the race is a longtime tradition in the Naples area and features both natural and man-made scenery, from the waters of the Gulf of Mexico to the architectural beauty of the multi-million-dollar homes runners pass on their way along the race route.

Following an out-and-back course that starts and finishes in Naples’ Cambier Park, runners leave the starting line and begin heading first west and then southward along Gordon Drive, which they follow for the next three and a half miles all the way down to the turnaround point at the lands’ end spot at the end of the road.

There, they turn around and head back along the course they’ve just run until they hit Kings Town Drive, where they turn and head into the Champrey Bay and Galleons Cove neighborhoods.

Thanks to the race’s multiple turnaround points, at the end of Gordon Drive and inside the neighborhoods, runners get a chance to view the elite competitors in the race multiple times and see any friends who are running either ahead or behind them at several points during the race, past participants say.

After the stretch of the race along Galleon Drive and the turnaround, runners then head back out of the neighborhood and onto Gordon Drive once again for the reverse route back toward Cambier Park and the finish line festivities.

One of the race’s really interesting and unique traditions takes place along the stretch on Galleon Drive, where a clergyman at Trinity-by-the-Cove Episcopal Church blesses the runners passing by (all runners pass by the church twice during the race) with holy water, which has become a landmark many runners look forward to in the race each year. 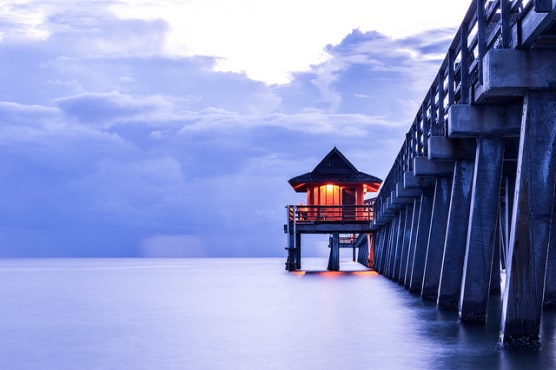 A view of the Naples Pier. (Photo by Pablo Tano/flickr)

Located along the southern tip of Florida’s Gulf coast, just over a two-hour drive west across the Everglades from Miami, the city of Naples tends to see typically mild to moderately warm weather in the winter, with relatively low precipitation compared to the spring and summer seasons.

In January, temperatures average between 53°F and 75°F, while rainfall totals average just over 2 inches for the month. On the day of the race (Jan. 15), the average low is 53°F and the average high is 75°F.

To reserve your spot in the winter 2023 running of the Barron Collier Companies Naples Half Marathon, register online at RunSignUp.com by clicking here.

Ever run in the Barron Collier Companies Naples Half Marathon? Share your impressions here, or post your review in the Comments box below.