Set for its 3rd annual running this fall here along Florida’s Gulf Coast, just across the bridge from the barrier islands that make up Clearwater Beach and Belleair Beach, the Phil Doganiero 3 Bridge Half Marathon celebrates the legacy of its namesake, who grew up in the local area and became one of its most successful businessmen and an avid participant and advocate of endurance sports here.


Born in New York, Doganiero came with his family to the Clearwater area in the early 1970s and went to middle and high school here, later earning his varsity letter in football. Those early athletic achievements would lead him to love sports throughout his life, as he later competed in Hawaii’s Iron Man triathlon and was a big booster of local youth sports.

The race that honors him is set to begin in Clearwater’s Coachman Park, which is located right behind the city’s main library and looks out onto the waters of the Clearwater Harbor Marina.

From there, runners in the half marathon will make their way around the park and onto the Clearwater Memorial Causeway, the first of three bridges you’ll cross during the course of the race.

You’ll make your way over to Clearwater Beach, running along Gulfview Boulevard as you pass by Pier 60 Park, one of the area’s best-loved places to go watch the sunset in the early evenings.

After that, the course heads south toward Clearwater Point, where you’ll reach the second bridge of the race, the Sand Key Bridge that takes you over into Sand Key Park. You’ll follow Gulf Boulevard south through the barrier island, all the way into Belleair Beach.

When the road reaches Causeway Boulevard, it’s time to turn left and head across the third of the race’s three bridges, the Belleair Bridge that brings you back over to the mainland and into the city again.

Then you’ll head north along Indian Rocks Road, Druid Road and Oak Avenue before heading back into Coachman Park, where you’ll cross the race finish line.

This being coastal Florida, the elevation changes are minimal throughout the race — the lowest point lies at about sea level, while the highest tops out at just over 40 feet above sea level. 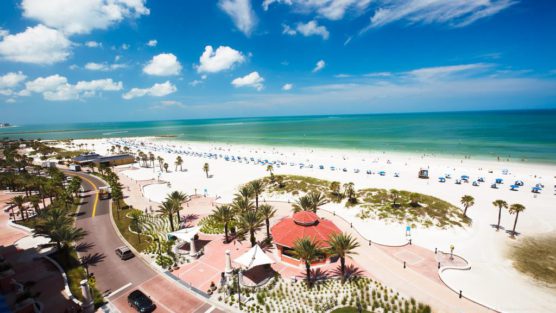 The Clearwater Beach walk, which you’ll pass by during the half marathon. (Photo courtesy Phil Doganiero 3 Bridge Half Marathon)

Nestled along Florida’s Gulf Coast, just northwest of Tampa and St. Petersburg, Clearwater typically sees some of its drier weather of the year in October, when average rainfall totals just over 3 inches.

See the race route map for the Phil Doganiero 3 Bridge Half Marathon here.

To reserve your spot in the 2019 running of Clearwater’s Phil Doganiero 3 Bridge Half Marathon, 5K or Kids Dash, register online at RunSignUp.com here.

Ever run in the Phil Doganiero 3 Bridge Half Marathon? Share your impressions here, as well as anything you learned about the race that you think other runners/walkers should know.