A few hundred runners cross the finish line each year at the December running of Fernandina’s Reindeer Run Half Marathon & 5K, a race organized by the locally based Amelia Island Runners group to benefit both the Nassau County Healthy Start program and the Friends of Fort Clinch.

The race takes runners along the beachfront streets and inside the tree-covered park roads of Fort Clinch State Park on Amelia Island, the southernmost of the barrier island chain known as the Sea Islands along the coasts of Georgia and Florida.

Known as the “isle of Eight Flags,” Amelia has had a long and tumultuous history that dates back long before the Revolutionary War, and today its heritage is preserved with a 50-block area of historic homes and downtown buildings known as “Old Town,” listed on the National Register of Historic Places.

Runners start and finish the out-and-back course for the race in Main Beach Park, which lies right on the beach and the waves crashing along the shoreline. From there, the course takes runners south toward Jasmine Street in both the half marathon and the 5K, where runners will see beautiful residential homes and palm trees everywhere. They’ll turn around and head north at Jasmine Street, this time heading north along Egan’s Creek Greenway Trail for about another mile.

The half marathon course continues through downtown Fernandina Beach and then weaves east and north, passing the Pippi Longstocking House, and then into Fort Clinch State Park, which is home to the 19th-century fort that shares its name and served as a garrison for soldiers in both the Civil War and the Spanish-American War.

This stretch of the race marks a refreshing change from the first half of the race — which are run out on the road and the occasional trail — as it takes runners along tree-covered park roads, filled with live oaks covered in Spanish moss.

The next four miles unfold through the park, though runners won’t get to see the actual Fort Clinch — it lies along the beach at the northern end of Amelia Island. Car traffic is permitted on the park roads through this section of the race, which is a detriment — because the cars have to slow down considerably along the park roads, they’re often idling as runners are passing by or as they’re passing the runners, which kicks up highly unpleasant exhaust fumes for the runners.

After finishing up the last four miles in the park, runners are almost back to the finish line at Main Beach Park, where water and race medals are waiting for every finisher on the beach. 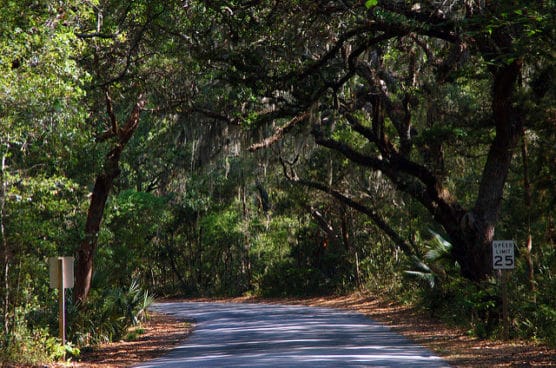 The road through the forest to Fort Clinch State Park on Amelia Island, Fla. (Photo by Britt Reints/flickr)

Nestled along the coast of the northeast corner of Florida, about 30 miles north of Jacksonville and roughly 130 miles south of Savannah, Ga., Fernandina Beach typically sees December temperatures that average between 48°F and 65°F, while rainfall totals average just over 2.7 inches for the month.

See the race route map for the Reindeer Run Half Marathon here.

To reserve your spot in the 2021 running of Fernandina Beach’s Reindeer Run Half Marathon or 5K race, register online at Active.com here.

Ever run in the Reindeer Run Half Marathon? Share your impressions here, or post your review in the Comments below.