When you run the streets of Saint Augustine, you’re literally running through the oldest part of American history there is — the city was reached as early as 1513 by the Spanish explorer Ponce de Leon, and it was officially founded in 1565 by Pedro Menendez de Aviles, another Spanish explorer. Today it is part of the Florida region known as the “First Coast,” which stretches from St. Augustine and Palm Coast all the way north to Jacksonville and Amelia Island.

Still a relatively sleepy coastal town — about 13,000 people live within the city limits — St. Augustine today is perhaps best-known for its historic role as the oldest European-founded city in the country and for the Spanish colonial architecture and historic homes along St. George Street, now a popular place for tourists to visit.

It’s also home to the St. Augustine Foot Soldiers Monument, which marks the key role that civil rights protestors played here in the early 1960s, events that proved crucial in building public support for the passage of the Civil Rights Act of 1964.

For the St. Augustine Half Marathon, all of this history will be on display as runners make their way through the streets of its historic downtown and across the intracoastal waterway twice, including stretches that unfold past local parks, through Anastasia State Park as well as residential areas.

Runners start the race in front of the Castillo de San Marcos monument, the oldest masonry fort in America, whose history dates back to the 1670s and lies nestled along the shore of Matanzas Bay, just east of downtown.

In between the race start and finish, runners will remain on paved roads throughout the race, which starts on West Castillo Street on Sunday.

There are actually three bridge crossings during the half marathon — once in the first mile, over the Bridge of Lions from St. Augustine into the area known as Anastasia (where the state park is located), and then twice over the Highway 312 bridge, before and after runners hit the half-way point between miles 6 and 7. 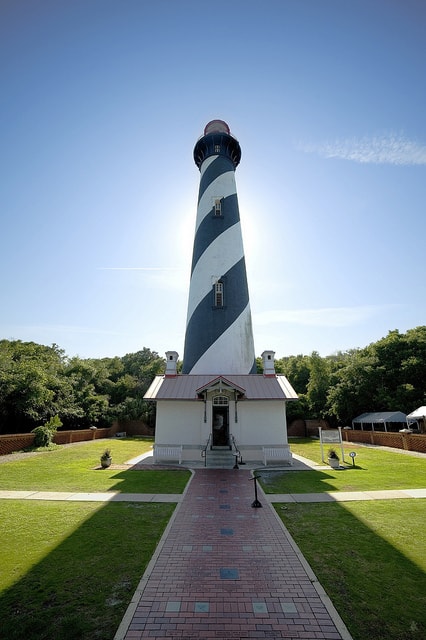 From there, runners head back across the bridge and the intracoastal waterway (where the San Sebastian River and the Matanzas River meet), and then over into Anastasia State Park, where they’ll run miles 9 through 11, on to the finish line next to the park on West Castillo Street.

See the race route map for the St. Augustine Half Marathon here.

To reserve your spot in the 2021 running of the St. Augustine Half Marathon, 10K or 5K race, register online at RunSignUp.com here.

Ever run in the St. Augustine Half Marathon? Share your impressions here, or post your review in the Comments below.