If you’ve ever seen the Jim Carrey film The Truman Show, then you have an idea of the kind of beautiful coastal architecture you’ll find along the route at the annual Seaside School Half Marathon & 5K, which takes runners on a long, straightaway-style out-and-back course along Highway 30A through several beach towns that stretch along Florida’s Gulf coast.

More than 4,000 runners show up each year for the half-marathon and the 5K event combined, for a race that’s mostly flat and fast, with ample views of the scenic Gulf waters and beaches, including Watercolor, Graytown Beach, Santa Rosa Beach and more.

Both the 13.1-mile half marathon and the 5K start in front of the post office in downtown Seaside along Highway 30A, and from there follow a route that takes runners westward along the highway for six and a half miles, and then six and a half back in reverse back to the starting line.

The half marathon turnaround point lies near the intersection of Laura Hamilton Boulevard and Highway 30A, just past Irwin Creek. After that, runners retrace their steps all the way back to the post office, where the race finish line lies. The course is both runner- and walker-friendly — walkers are encouraged to sign up.

Runners in the half marathon start their race at 7:00 AM, followed by those running in the 5K at 7:25 AM. Organizers will keep the course restricted to runners for three hours, after which they begin re-opening the route to normal auto traffic.

They will continue to keep the course open until 10:30 AM, which means that runners will need to keep a pace of 14 minutes per mile or better in order to finish in time to have their official race time recorded. 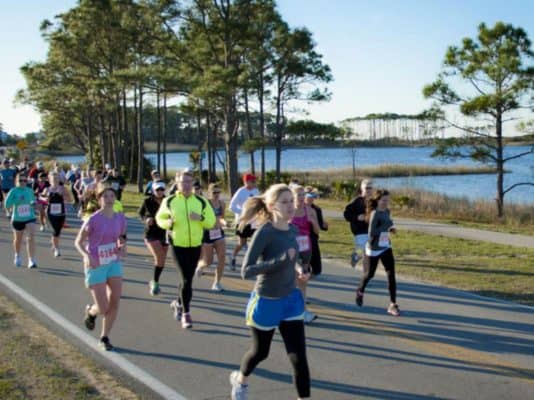 Located near the Florida Gulf Coast town of Santa Rosa Beach, Seaside typically sees cool to moderately warm temperatures in late winter/early spring, as February temperatures average between 46°F and 71°F. Rainfall is an ever-present possibility, as precipitation averages just under 6 inches during the month.

See the race route map for the Seaside School Half Marathon here.

To reserve your spot in the late winter 2023 running of the Seaside School Half Marathon or 5K race, register online at RunSignUp.com here.

Ever run in the Seaside School Half Marathon? Share your impressions here, or post your review in the Comments below.