More than 400 runners and walkers crossed the finish line each year at Key West’s Southernmost Marathon and Half Marathon, which takes runners along the shoreline of — just as its name suggests — the southernmost point in the contiguous United States, here along the tip of South Florida, roughly 90 miles across the Gulf of Mexico from Cuba.


Runners and walkers — the half marathon is open to both — will start the out-and-back course for the race near the western end of the island, at the Rum Barrel Bar & Restaurant at Front Street and Simonton Street. From there, the half marathoners and the full marathoners will follow the same course for roughly the first 7 1/2 miles, heading around the western and southern edges of the island to U.S. 1.

The first few miles of the race — which is virtually all flat throughout, and never higher than a few feet above sea level — take runners through Key West’s Old Town neighborhood, where most of the tourist attractions and signature Key West-style architecture can be found, everything from restored wooden homes with lush tropical trees and plants growing outside to the Ernest Hemingway House, where the legendary author lived throughout most of the 1930s.

After reaching the end of South Street they’ll be at the actual location of the Southernmost Point of the continental U.S., a giant red, black and yellow bullet-shaped landmark that’s pretty impossible to miss.

Next, the course heads to Higgs Beach and then to South Roosevelt Boulevard, which will take runners for the next few miles to the intersection with U.S. 1. The course keeps going from there, though, turning right and across the Overseas Bridge and running the length of nearby Stock Island before reaching the turnaround point.

Once they make the turnaround, runners recross the bridge, this time turning right again and running the top half of the island before crossing the finish line on Front Street. 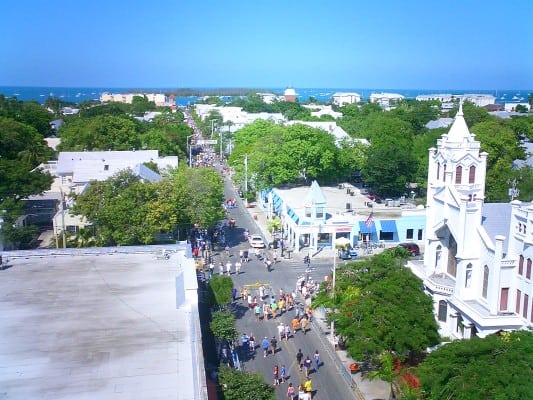 Located along the westernmost of the Florida Keys, famously 90 miles from Cuba and roughly 160 miles southwest of Miami, Key West typically sees October temperatures between 76ºF and 85ºF, while rainfall totals average just over 4.3 inches, making it one of the city’s wetter months of the year.

To reserve your spot in the 2020 running of Key West’s Southernmost Marathon, Half Marathon or 5K race, register online at Active.com here.

Ever run in the Southernmost Half Marathon? Share your impressions here, or post your review in the Comments below.