Note: The 2021 race is a virtual event. Registration details are included below.

Take a wild, scenic run through three of the four parks that make up the magical place that is Walt Disney World in Florida — including Disney’s Animal Kingdom, Hollywood Studios and Epcot — at the Star Wars Rival Run Half Marathon, the third in a series of race events held on Disney theme parks.

From there, you’ll follow the course as it winds south toward Animal Kingdom, where you’ll run through the roads and paths inside that zoological theme park — you’ll run past the Wildlife Express Train, Harambe Market and Pandora, an area of the park devoted to the World of Avatar.

This section is truly eye-popping if you’re a fan of the 2009 James Cameron movie, as you’ll get to see the “floating mountains” that banshees fly through as well as waterfalls, jungle trails and an African river.

Next is Hollywood Studios, the world of “Star Wars.” After you exit the Animal Kingdom, you’ll run along the roadways of Walt Disney World for the next 2-3 miles, and then head into Hollywood Studios, where you’ll see the mammoth Star Wars Galaxy area that was still under construction as of this writing (April 2018) and slated to open in 2019.

This stretch will wind along the park roads that pass by the old-style Hollywood studios (and the Indiana Jones stunt spectacular) before heading out back into the parking lot of that theme park on the way to Epcot.

Run through the nations of Epcot. One of the most scenic stretches of the race occurs here in the final few miles as you make your way along the lakeshore of Disney’s Yacht & Beach Club resort before heading into Epcot, where you’ll run past every one of the 11 pavilions devoted to nations around the world — Japan, France, Germany, Great Britain, Norway, Mexico, Italy and even the United States.

The finishing stretch of the race will bring you past Epcot’s signature Spaceship Earth ride to the finish line in that theme park’s parking lot. 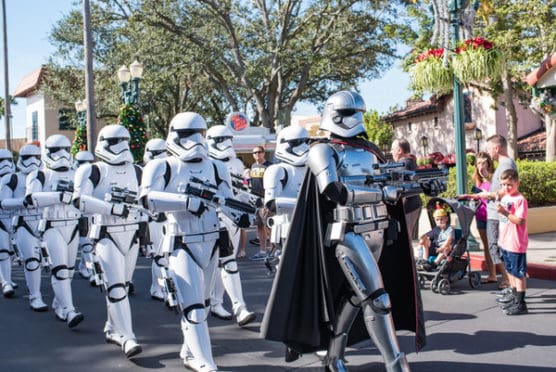 Located less than a half-hour’s drive from Orlando International Airport, Lake Buena Vista is one of the two municipalities that make up Walt Disney World, and where you can expect plentiful sunshine and mild-to-warm temperatures on race day — April is the area’s driest month of the year.

To reserve your spot in the 2021 running of the Star Wars Rival Run Half Marathon, 10K or 5K race, register online at the event website below.

Ever run in the Star Wars Half Marathon? Share your impressions here, as well as anything you learned about the race that you think other runners/walkers should know.