More than 1,000 runners come out to run the streets of this capital city on the Florida panhandle each February, for an event that starts and finishes in downtown Tallahassee and features stretches past several local parks and neighborhoods, as well as through the campus of Florida State University.

Run entirely on paved surfaces for the entire route, the race is an excellent one for beginners as it experiences only moderate change in elevation, rising from a low of just over 50 feet above sea level to a high of over 200 feet throughout the entire half marathon route.

From the starting line in Tallahassee’s city center along Monroe Street, the 13.1-mile race heads north along Monroe and later east on Glenview Drive, taking runners through the city’s Midtown and Old Town neighborhoods, following a course of rolling hills (including the Lafayette Street hill) for the first half of the race.

The hills become even more moderate for the second half of the races, as runners run across FAMU Way while passing through Florida A&M University and toward the Doak Campbell and Dick Howser Stadiums at Florida State University, by way of the pedestrian tunnel on Stadium Drive. After leaving the university, you’re almost done–the course then heads back through downtown toward the finish line near the Florida Supreme Court building, state capitol building and city hall.

Organized by the local running group the Gulf Winds Track Club, the 2023 running of the race will mark the event’s 49th anniversary — the 26.2-mile marathon was run for the first time in 1975, while the 13.1-mile half-marathon was added later, in the mid-1980s — and the event is open to wheelchair competitors as well as runners. 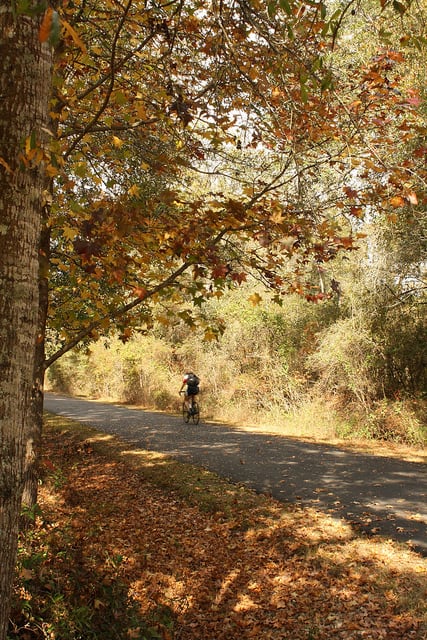 Cyclist on the St. Marks Trail in Tallahassee, Fla. (Photo by Capital City to the Sea Trail/flickr)

Located along the Florida panhandle in the northwest part of the state, about 165 miles west of Jacksonville, Tallahassee typically sees February temperatures that average between 42°F and 67°F, while precipitation amounts average just over 4.6 inches for the month.

See the race route map for the Tallahassee Half Marathon here.

To reserve your spot in the 2023 running of the Tallahassee Marathon or Half Marathon race, register online at RunSignUp.com here.

Ever run in the Tallahassee Half Marathon? Share your impressions here, or post your review in the Comments box below.