The home of golf’s annual springtime Masters Tournament hosts the 15th annual running of its 13.1-mile road race in the late winter of 2023 with a course that takes runners on a course through some of the Garden City’s most scenic areas, showing off its wide, tree-lined streets, the architecture of its restored and revitalized downtown areas, and its authentic Southern charm.

Runners start the loop course for the race at the Augusta Common, just meters from the Georgia/South Carolina border. The race begins by passing the Augusta Museum of History and barely passing the boyhood home of former President Woodrow Wilson before heading west past Augusta University’s health sciences campus.

The course then brings runners down Central Avenue and into midtown Augusta, leading runners past commercial districts and into the part of the city known as Summerville, giving way to beautiful, large residential homes — many of which are many decades old — lining the street. This section also features a long, steady, gradual uphill however, so it’s a blessing to have plenty of postcard-perfect scenery to distract during the long, gradual climb.

After about a mile running through the main Augusta University Campus, the course heads north toward Lake Olmstead. If you’re a golf fan, it’s likely that you may (almost) forget you’re running a 13.1-mile race on the stretch through this area, though it will help that you’re roughly three-fourths of the way through the course at this point, which is followed by a run through the neighborhoods around Lake Olmstead. From there, the course heads first along Canal Trail, then down one of downtown Augusta’s main streets, returning to Broad Street just before crossing the finish line.

The scheduled starting time for the race is 7:15 AM, and runners will have 3.5 hours to complete the course. For runners who aren’t up for the half marathon or 10K, the race also hosts a “Sports Fantatic 5K,” whose proceeds benefit rising college athletes from the local area. 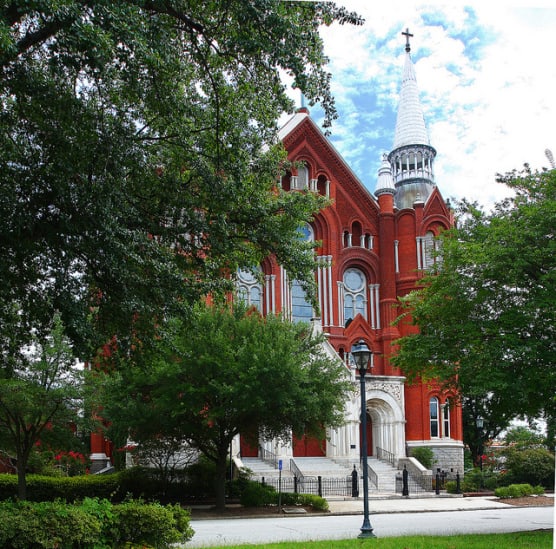 Sacred Heart Cultural Center, one of the many local landmarks runners see at the Augusta University Half Marathon. (Rennett Stowe/flickr)

Located along the waters of the Savannah River, which marks the border between Georgia and South Carolina, Augusta typically sees February temperatures that average between 36°F and 62°F, while precipitation amounts average just over 4 inches for the month.

See the race route map for the Augusta Half Marathon here.

To reserve your spot in the late winter 2023 running of the Augusta Half Marathon, 10K or 5K race, register online at Enmotive.com here.

Ever run in the Augusta Half Marathon? Share your impressions here, or post your review in the Comments box below.