Becoming an established road race in Atlanta after just a few years, the Publix Atlanta Marathon & Half Marathon (known as the Georgia Marathon before 2019) is one of the biggest running events of its kind anywhere in the state. Each year’s race brings out roughly 16,000 runners from around the country to take to the streets of Atlanta, along an often hilly loop route through the city.

The race follows an out-and-back race through the city, starting at downtown Atlanta’s Centennial Park, which lies within walking distance of CNN’s headquarters. From there, the course takes runners through the Marietta Street corridor, several streets downtown and the historic Sweet Auburn district, where Martin Luther King Jr. lived and preached at Ebenezer Baptist Church.

After the stretch through the Sweet Auburn district, the course heads through intown neighborhoods on its way to the Inman Park district, which shows off the character of the city in its historic architecture and tree-lined streets. The course through here is somewhat hilly and up-and-down, but not overly taxing. There were plenty of spectators out along this stretch of the course as well, looking up from brunch on their balconies to shout out and give the runners some encouragement.

Running through Inman Park, the course next takes runners along a stretch that’s much hillier, the stretch along the Freedom Parkway near the Jimmy Carter Center. This portion of the race has one fairly big hill that lots of runners were huffing and puffing on their way up, though the generally cloudy and cool conditions helped with stretches like this one.

As it leveled out at the top of the hill, Freedom Parkway then dropped down again on its way toward Atlanta’s Virginia-Highland neighborhood, where there were lots more spectators outside (even some playing live music with their own guitars and drums).

Perhaps the most refreshing part of the race occurs when runners get to Piedmont Park, Atlanta’s largest urban park, partly because the half-mile or so of course on the way to the park is mostly downhill, but also because there’s tons of spectators out cheering you on when you really need it — by this point in the race, you’ve run more than nine miles already, and you’re starting to feel the fatigue and wear and tear.

The last four miles of the race feature a range of hills, mostly long, steady uphills and downhills, through both the Georgia Institue of Technology campus and the streets near the Coca-Cola Company world headquarters and the Georgia Aquarium. The last stretch of the race takes runners along Marietta Street, past CNN’s Atlanta headquarters to the finish back in Centennial Park. 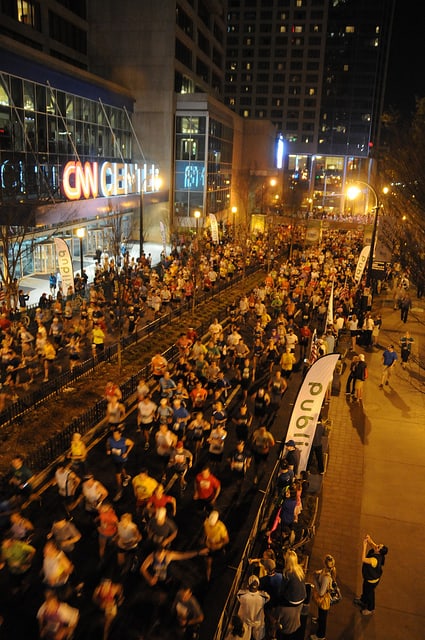 The start of the Publix Georgia Marathon & Half Marathon in March 2012. (Photo by Fire Inc Atlanta/flickr)

Known for its often sweltering hot and humid summers, especially in the late weeks of summer, the city of Atlanta usually has its most pleasant weather of the year during the fall and spring, which typically brings an abundance of sunny days with generally mild, moderate temperatures.

On race day (Feb. 26), the average low is 41°F and the average high is 60°F, and early spring rainfall is always a possibility.

See the race route map for the Publix Atlanta Half Marathon here.

Yes, walkers as well as runners are welcome to participate, provided they can keep a pace of 15 minutes per mile or faster.

To reserve your spot in the winter 2023 running of the Georgia Marathon or Half Marathon race, HakuApp.com here.

Ever run in the Publix Atlanta Half Marathon? Share your impressions here, or post your review in the Comments box below.