One of a series of races in the quickly-growing Race 13.1 Half Marathon series across the Southeast, the Race 13.1 Evans Half Marathon is set to make its inaugural running in late April 2015, here in the area where the “Godfather of Soul,” James Brown himself, was born and raised.

NOTE: This race has been discontinued and will not be run again in 2016.

The race is set to take place about 20 minutes west of Augusta, the home of the legendary Masters Tournament, which lies within about three hours of Atlanta and less than two hours from Columbia, S.C. Evans, a suburban community that has boomed in recent years as Augusta’s population has grown and moved west, has plenty to offer with its beautiful landscapes and picturesque running trails.

Runners will start the race at Evans Towne Center Park, home to both an expansive outdoor recreation green and the Lady Antebellum Amphitheater, named for the country trio whose members Josh and Charles Kelley were both born and raised in nearby Augusta. From there, the race heads out onto Evans Town Center Boulevard and then onto Evans to Locks Road.

Once runners make it onto Evans to Locks Road, they’ll remain on the same road for nearly the next six miles, passing by residential neighborhoods as they make their way along a very gradual downhill from the start to the half-way point, which they’ll reach once they get to the Savannah Rapids Pavilion and the Augusta Canal Locks.

Seeing the locks to the left as they head onto the Augusta Canal Trail, now a popular dirt trail for walkers, runners and cyclists year-round, they’ll run across the Augusta Canal Bridge — looking over the waterway where generations ago cargo boats were pulled by draft animals up to the locks on their way to the Savannah River — and then look for the half-way turnaround point.

Once they hit the turn, they’ll retrace their same steps in reverse all the way back to the finish line in Evans Towne Center Park. 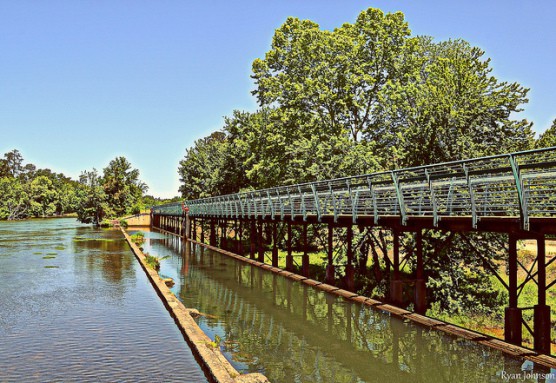 Located about 10 miles northwest of Augusta and just a few miles from the Savannah River where Georgia and South Carolina meet, Evans typically sees April temperatures between 48ºF and 78ºF, while April also brings the area’s lowest rainfall of the year, with just over 3 inches on average.

See the race route map for the Race 13.1 Evans Half Marathon here.

Ever run in the Race 13.1 Evans Half Marathon? Share your impressions here, or post your review in the Comments box below.