Set for its 16th annual running here in this western Georgia city, the Red Nose Half Marathon is set to take runners through the streets of Columbus here in the cold of early January, to give runners a chance to get their resolutions started off on the right “foot.”

Runners follow an out-and-back course for the race that starts and finishes at the intersection of 11th and Broadway, near the city’s Fountain City Coffee, where a handful of local runners met a few years back with the idea of promoting fitness and athleticism in the local community after what is usually an indulgent time for most, during the Thanksgiving and Christmas holiday season.

The race took flight and saw its first running in 2007, and ever since the event has continued to grow — but organizers have kept their promise intact to keep the race free to anyone who wishes to enter. The only charge they add, is for the long-sleeve race t-shirt that’s available for purchase for $25 for any runner who wishes to buy one.

As for the race itself, the course takes runners on an out-and-back loop first around the city’s downtown and then out onto the riverwalk sections of both Columbus and nearby Phenix City, Ala., which lies just across the Chattahoochee River from Columbus. Runners will follow the route for just under a mile on the Alabama side of the river, and then cross back over at the Dillingham Street bridge between the mile 3 and 4 markers back into Georgia.

After that, runners then make their way for a long stretch along the city’s riverwalk, heading south and east down past the city’s Memorial Stadium, which hosted the annual University of Georgia vs. Auburn University SEC football game until the mid-1950s.

Today, the stadium hosts a number of local high school football and soccer games. Once past the stadium, runners continue down to the turnaround just past the mile 8 marker, and then head back north along the route they’ve just run.

The final stretch of the race brings runners back along the riverwalk, which is known officially as the Chattahoochee RiverWalk, a 15-mile paved trail that connects downtown Columbus with nearby Fort Benning. 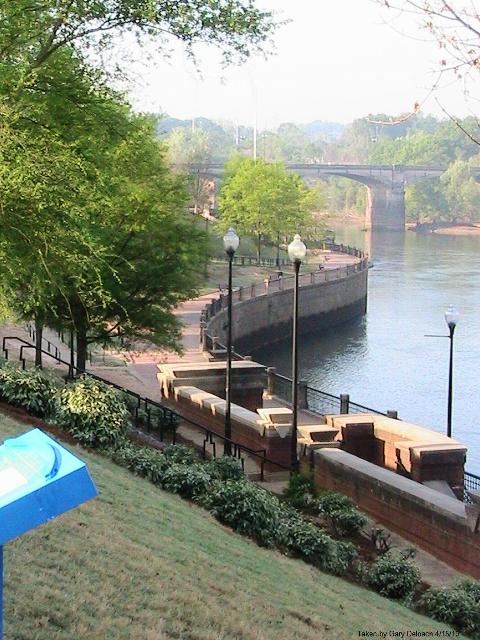 A section of the Chattahoochee Riverwalk in Columbus, Ga. (Photo by Wikimedia)

Nestled along the winding Chattahoochee River here in central western Georgia, along the state line with Alabama and just over 100 miles southwest of Atlanta, Columbus can see quite cold weather conditions in early January, when the city’s average monthly temperatures range between 58°F and 37°F.

See the race route map for the Red Nose Half Marathon here.

To reserve your spot in the winter 2023 running of Columbus’s Red Nose Half Marathon, register online at RunSignup.com here.

Ever run in the Red Nose Half Marathon? Share your impressions here, or post your review in the Comments box below.