Note: Unfortunately, the Rock & Roll Savannah race has been canceled for 2022.

Set for its 11th annual running this fall, Georgia’s Rock ‘n’ Roll Savannah Marathon & Half Marathon brings more than 14,000 runners and walkers each year to the streets of the city immortalized in John Berendt’s 1994 classic Midnight in the Garden of Good and Evil, with more than 10,000 of those finishers completing the half marathon alone.


If you’ve ever read what local Savannah residents call simply “the book” — and no, seeing the dreadful movie adapation of the nonfiction classic is a poor substitute — then you know exactly what the title is all about, as this charming Southern city embodies nearly every virtue (and every vice) that is characteristic of this city and the region in which it lives.

It’s exactly that Southern charm and romance that runners will get a taste of at the race, which thankfully — for both the runners’ and the spectators’ sakes — takes place at a time when this normally hot and humid city will have cast off summer’s heat for the far milder weather of fall.

The race begins at the corner of Bull and Bay Streets in the city’s downtown historic district, known for its plentiful hotels, shops, restaurants and bars that are filled to the rafters every St. Patrick’s Day.

This time of year, however, the downtown is populated largely by tourists as well as students at the Savannah College of Art and Design, whose campus lies just blocks from where the race started.

After the start through what is a really visually interesting part of Savannah — the historic district lies just a stone’s throw from the Savannah riverfront and walk — the race heads west along Bay Street and out of downtown, into some pretty nondescript areas.

The course spends the next few miles heading mostly outside the city, through more industrial-warehouse-commercial district areas.

However, this isn’t at all disappointing, especially for runners looking to set new personal record times or for runners trying their first marathon or half marathon — this course is pretty much tailor-made for someone who’s a first-timer, as it really is one of those few race courses that’s almost completely flat for the entire 13.1 miles. 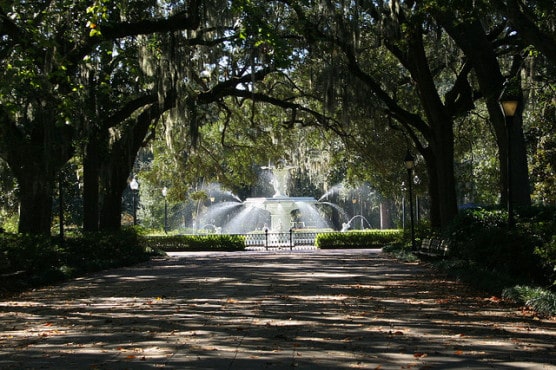 The Forsyth Park Fountain in Savannah, Ga. (Photo by rjones0856/flickr)

Once the race course approached the mile 6 marker, though, the scenery and the city became much more interesting as we headed back into more historic neighborhoods, with lots more people on the sidelines cheering runners on.

Moss-covered trees lined with historic homes, and by the time we reached the later miles of the races, tons of people were out on the sidewalks — actually the lane available for runners really began to narrow in the stretch along Price and Henry Streets in the second half, when spectators nearly equaled the number of runners out there.

Nestled along Georgia’s Atlantic coastline in the state’s southeastern corner, just across the river from South Carolina, Savannah typically sees far milder and drier weather in the fall than in the summer, when its temperatures and humidity can combine for sweltering heat.

Registration is closed for this race.

Ever run in the Rock ‘n’ Roll Savannah Half Marathon? Share your impressions here, or post your review in the Comments box below.