Long stretches of paved trails that snake through the lush, green, wooded forest areas of the northwest Atlanta suburbs are the hallmark of the Silver Comet Marathon & Half Marathon, for an event that usually sees more than 1,500 runners each year.

The half marathon route (like the full marathon) follows the Silver Comet Trail, the now-paved multi-use trail for bikers, joggers and walkers that winds nearly 40 miles from Smyrna to the Georgia-Alabama state line, part of one of Atlanta’s most successful rails-to-trails initiatives.

Named for the Silver Comet train that ferried passengers back and forth from Atlanta to Anniston, Ala., in the 1940s and 50s, the trail had been abandoned until the late 1980s, when a group of local residents formed a nonprofit to raise funds toward converting it for recreational use. Ever since, the trail has become one of the metro Atlanta area’s most popular weekend hikes and biking trails.

The 13.1-mile course for the race starts at the Mable House Cultural Arts Center and runs for about 1.5 miles before entering the trail at the Silver Comet Bike Depot. From there, it runs out 5.75 miles and back to the depot for the finish. The trail is long and straight and largely flat, but it also has some long, gradual uphill stretches that many runners will find challenging, especially as they occur in the race’s last few miles.

Here’s how one runner (this writer, actually) found running the race back in 2009:

“While the month of October is normally one of the Atlanta area’s driest months of the year, 2009 was a different story. This year, the city received somewhere in the neighborhood of 20 inches of rain or more for the month, including a historic flood that inundated the city this fall, which gives you an idea of what conditions were like at this fall’s Silver Comet Half Marathon.

“Rain pretty much fell throughout the race, and was particularly heavy at the start, for the first mile and a half or so that takes place on open road from the start near the Mable House Amphitheatre up to the point where the race turns onto the Silver Comet Trail. Once we were on the trail, thankfully the generous tree cover provided some shelter from the raindrops, which lessened up here and there during the race.

“What this meant was that a race that normally takes place under gorgeous fall sunlight, along a paved trail through the woods, was quite a wet and soggy mess. However, once we were out on the trail and warmed up, that didn’t really matter. It was a nice, fun change of pace-type race, especially if you’re used to running in larger races through big cities like Atlanta’s springtime ING Georgia Half Marathon, which I’ve run twice in the past. 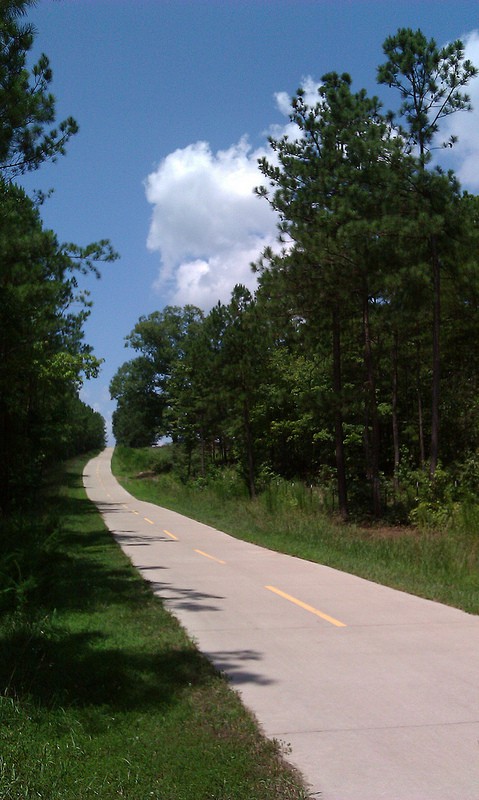 A stretch of the Silver Comet Trail, taken in 2012. (Photo by atlbike/flickr)

“The crowd is generally very friendly at the race, as everyone’s typically in a good mood — this year’s race was run on the morning of Halloween, which added a bit to people feeling festive. However, the narrowness of the course — the trail is probably about half the width of lane of traffic on your typical street — means that when you come across groups running together, it can be hard to pass them by if you’re running a faster pace.

“The only part that’s somewhat problematic is the turnaround point, which occurs a bit past the 7-mile point in the race. The already narrow lane for one-way runner traffic turns into 2 even narrower lanes, as the leaders run past you, so you really have to get into almost single-file to stay on the course. Still, overall the race is a really nice, fun race to run, and I’d recommend it to anyone thinking of running a smaller race.”

Located about 14 miles west of Atlanta in central northern Georgia, Mableton typically sees mild to moderately warm weather in October, which has brought record temperatures here as low as 28°F (in 1976) and as high as 95°F (in 1954).

See the race route map for the Silver Comet Half Marathon here.

To reserve your spot in the fall 2023 running of Mableton’s Silver Comet Marathon or Half Marathon, register online at Active.com here.

Ever run in the Silver Comet Half Marathon? Share your impressions here, or post your review in the Comments box below.